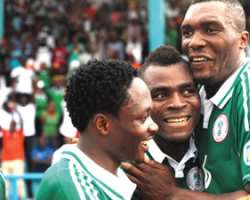 
Nigeria's Super Eagles on Saturday saw off the boastful Malawi team 2-0 to advance to the final play-off round of the African qualifiers.

With the victory, the Eagles thus finished top of Group F with 12 points from six matches, while Malawi finished in second place with seven points.

The score line could have been higher but for several wasted chances by the African champions.

CSKA Moscow forward Ahmed Musa should have given the home side the lead as early as the third minute, but he shot wide.

The visitors were content to soak the pressure all through the first half but it was evident their defensive formation would crumble as the Nigerians attacked relentlessly with midfielder Mikel Obi the initiator of most of the moves.

Fenerbache striker Emmanuel Emenike, who was returning to the team for the first time since February, grabbed the opener in first half injury time, when he got on the end of a superb long ball from impressive Lazio midfielder Ogenyi Onazi to calmly chip past the diving Malawi goalkeeper Charles Swini.

The Eagles added a second in the 51st minute when Victor Moses fired home from the penalty spot after a goal-bound Nnamdi Oduamadi was adjudged to have been upended inside the box by the Madagascan referee.

The Malawians were reduced to 10 men two minutes later when Lumbukani Mzuva was sent off for a second yellow card for a late tackle on Musa.

But the Eagles failed to make their numerical advantage count afterwards as they wasted begging chances. Again, keeper Swini was outstanding for Malawi as he denied the Nigerians time and time again.

Chelsea midfielder,  Mikel, named TomTom Most Valuable Player of the match, said, 'We've done 50 per cent of the job and we have to see who we play against in the final round. The most important thing is that we have to keep winning.'

The Eagles will know their opponents when the final play-offs draw is conducted by the Confederation of African Football on September 16.

The first legs of the play-off ties will be played between October 11 and 15, while the return legs are slated for November 15 to 19.

Super Eagles coach,Stephen Keshi has expressed confidence in his team,adding that he is not scared of meeting any opposition.. On the prospect of which country the Super Eagles would be drawn against, Keshi said that his team can face any side. 'I'm confident in this team. The team that played today can face any side. I don't care about which team we'll be playing in the next round,' Keshi said. 'The reason we featured Oduamadi was because he is quick on his feet, can win penalties and he is a hard worker. He was supposed to complement Mikel Obi in the front but the Malawians decided to sit back in the game,' Keshi said after the game. 'This doesn't mean we can't introduce new players later. If I see any good player in the domestic league or elsewhere, I'll bring them in. There's no sentiment in the selection of players.' Nigeria will on Tuesday play a friendly against Burkina Faso in Kaduna, as they prepare for the last qualifying stage.