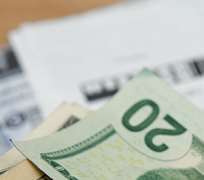 In a small and stuffy room in midtown Manhattan, some people are filling in forms while others wait patiently in line to submit them. It is spring in New York City but the sweltering heat and the poor ventilation is reminiscent of summer. The teller shielded by a glass window barks orders through a round hole. With one hand on his suitcase, Omar tugs at his collar to loosen the red and blue striped tie around his neck. Pearls of sweat are visible on his forehead.

'I am sending money to a person,' he speaks deliberately. Seemingly satisfied with his answer, the teller continues to punch her keyboard and shouts the next question, 'How much?' He knows the drill. And like most migrant workers in the city, the trek to this hole in the wall is part of his routine on pay days.

Billion dollar industry
It's hard to believe that this grimy cubicle is the face of a billion dollar industry. The global money-transfer industry, having escaped the financial crisis unscathed, is making huge profits. Not only do the companies charge a fee to transfer money to another country, they also make profits off the exchange rates. Like when Omar sends his monthly $200 contribution to his family in Ghana, he pays up to 8% in remittance or transfer fees. Remittance is money sent to someone as an allowance.

Egypt and Nigeria are among the top recipients of migrant remittances, says the African Development Bank's latest report, the African Economic Outlook 2013. According to the report, the two countries received 64% of total remittances to Africa in 2012 - US$18 billion transferred to Egypt and US$21 billion to Nigeria.

The World Bank estimates that there are 140 million Africans living outside the continent. Scores of young Africans, like Omar, move to the West in search of better jobs every year. Omar settled on driving a yellow cab in New York City after holding various odd jobs, he told Africa Renewal. He bragged about how he made US$1,000 some days after pulling an all-nighter. A portion of his money goes to pay for his parents' rent and school fees for his siblings in Ghana.

As a green card holder, which gives him permanent residency in the United States, Omar can use walk-in payment facilities like the one in midtown Manhattan without fuss. Wire transfer companies have recently been under greater scrutiny and tighter regulations put in place requiring them to 'know their customers.' To send money abroad, the sender's identity and that of the receiver must be disclosed. Often tellers will ask for proper identification. But for illegal migrants, this is not an option. They often work and get paid under the table and therefore prefer to use informal channels. These unrecorded flows are believed to be at least 50% larger than recorded flows, says Dilip Ratha, a World Bank senior economist in charge of migration and remittances. Globalisation has created a demand for a cheap and mobile labour force, notes Rob McCusker in his article on underground banking written for the Australian Institute of Criminology. There is often the cultural expectation, he says, that migrant workers will send a proportion of their earnings to families back home.

Hawala
A lot of the moneysent informally is hard to track. For example, money carried by visiting friends or acquaintances. But there are informal banking systems like the hawala (which means 'trust' in Arabic) networks that serve people who want to remain anonymous because they require no identification. The fees are much lower, between 3% and 5%. The term hawala is now often used to mean 'transfer,' explains Ibrahim Farah, a Somali-American who operates a money transfer business in Nashville, Tennessee. Speaking to Nashville Public Television's series, Next Door Neighbours, Farah says it's an age-old practice that was used by Arabic traders in the past to protect themselves against highway robbers. Hawala was later used in the Middle East, Asia and Africa to move money quickly and safely.

With the collapse of the banking system in Somalia following civil war in the 1990s, hawalas were used by refugees and internally by businesses and non-governmental agencies to pay employees. Backed by the World Bank and the UN and fuelled by the Somali diaspora community, the Somalia remittance network channels about US$1.5 billion a year. The money has helped keep Somali families afloat over the years, especially during the 2011 famine. However, because of fears that these alternative banking systems could become vessels for money launderers and terrorists, many countries have introduced new legislation and tighter controls, which has forced some hawalas to close.

Redefining remittances
Somalia is not the only African country where migrant remittances have become an important source of external funding. Officially recorded remittance flows to Africa by the World Bank are estimated to have increased from US$ 9.1 billion in 1990 to nearly US$40 billion in 2010. These remittances equalled 2.6% of sub-Saharan Africa's gross domestic product in 2009, or almost 60% of official aid flows to the region.

African countries rely heavily on external funding for development. But foreign direct investments and official development aid have declined over the years, notes the African Development Bank (AfDB). Development experts believe remittance flows can help reduce poverty and grow economies. However, a big chunk of the remittances go to pay hefty bank fees. 'High transaction fees are cutting into remittances, which are a lifeline for millions of Africans,' states Gaiv Tata, the World Bank's director for finance and private sector for Africa.

Ghana, South Africa and Tanzania are the most expensive countries in Africa to send money, with fees averaging 20%, according to the Send Money Africa database funded by the African Institute for Remittances. One reason is the limited market competition for cross-border payments. The database shows Africans pay higher fees to send money home than any other migrant group. Opening up the remittance market to competition and better information to consumers could bring remittance prices down, says Massimo Cirasino, another senior World Bank economist.

The world's eight most industrialized countries known as the G8, and the group of finance ministers and central bank governors from the G20, plan to bring remittance fees down to 5% by 2014 from the current average of 12.4%. This would put US$4 billion back in the pockets of Africa's migrants and their families. The plan will involve increasing competition and banning exclusivity agreements, providing consumers with more information on prices and conditions through innovation and improved efficiency. For example, an overhaul of the Rwandan payment system has helped reduce the cost of sending money to that country from 19% to 15% over the past two years.

Remittances are an important share of foreign reserves for countries, but their impact on development and economic growth are minimal if they are only spent on consumption. Cash-strapped African governments are trying to get migrants to invest part of their wealth in their homeland in the form of diaspora bonds. The capital raised could be earmarked for big development projects. The initiative is not new. The governments of India and Israel have raised about US$40 billion since the 1950s using these bonds, noted Suhas L. Ketkar and Dilip Ratha in a 2007 World Bank research paper on diaspora bonds.

In Africa, Ethiopia was the first country to issue diaspora bonds to finance a hydroelectric power dam. The so-called Millennium Corporate Bonds, issued in 2009, failed to sell. Analysts cited lack of trust in the government as a guarantor and political risks as some of the reasons for the flop. In 2011, the government re-advertised the bonds as the Renaissance Dam Bonds, lowering the minimum denomination to an affordable US$50 and offering to pay yields or interest to the buyers every six months. Waiving remittance fees associated with the purchase of the bonds was another new feature added.

Meanwhile, Rwanda had a more successful outcome. When Rwanda's major donors suspended aid after the UN accused its government of backing rebels in the Democratic Republic of the Congo - a charge it denied, Rwandans living internally and abroad, as well as 'friends' of Rwanda, were called upon to donate to a 'solidarity fund' named Agaciro Development Fund, which means 'dignity' in Kinyarwanda. By August 2012, the fund had attracted pledges of about US$31 million, according to The Guardian, a UK newspaper.

Issuing Diaspora bonds and turning remittance flows into bonds or instruments that can be sold to investors are good alternatives to borrowing from the international capital market, says the AfDB. According the bank's research, Africa could potentially raise $17 billion annually using future flows of exports or remittances as collateral. The arguments in favour of enlisting migrants as investors are that migrants are often interested in housing, infrastructure, health and education projects and they are thought to be more loyal than financial investors in times of stress.

Selling the bonds in small denominations is also a plus for low-wage earners. However, as Ethiopia learned, patriotism alone cannot drive investment - people have to make a financial return. Trust is another important factor in marketing bonds to the diaspora. Transparency in the use of funds could ease concerns. If done right, experts believe these bonds could be a promising financial vehicle for African countries to attract resources, and for the diaspora to satisfy their yearning to contribute to the development of their countries.