Jonathan storms out of reconciliation meeting; accuses Obasanjo of being behind PDP crisis 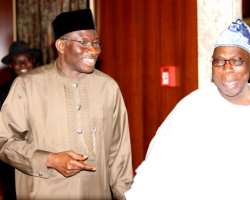 style="text-align: justify;"> 'Obasanjo created the problem, he should go and solve it,' Mr. Jonathan
was quoted as saying at a meeting he held with leading members of the
Abubakar Baraje's faction of the party on Sunday night.
The reconciliation meeting was called a day after former Vice President
Atiku Abubakar, seven state governors, and some other party top guns
walked out of the party's national convention in Abuja and then announced
the formation of a parallel faction.

style="text-align: justify;"> Mr. Obasanjo was not at the meeting but both men had worshipped together
at the Aso Rock chapel earlier that day.
Sources at the meeting said after the 'dissident' governors, led by Kano
State Governor, Musa Kwankwaso, tabled their grievances; a livid President
Jonathan fumed about how opposition elements within his party were trying
to blackmail him to submission.

style="text-align: justify;"> He then suddenly rose from his seat and stormed out of the meeting saying,
while going away, that he was no longer in the mood for any reconciliation
talk and that Mr. Obasanjo, who created the mess in the party in the first
place, should be allowed to clear it.
'We were shocked when the president walked out of the meeting in anger
saying he had grown increasingly frustrated by Mr. Obasanjo's
destabilizing antics,' one of our sources said. 'He pointedly accused the
former president of being behind the crisis.'

style="text-align: justify;"> Another source said as the president hurried away, the chairman of the
party's Board of Trustees, Tony Anenih, ran after him pleading with him to
return.
He eventually returned.
The president's adviser on political matters, Ahmed Gulak, as well as his
senior special assistant on public affairs, Doyin Okupe, did not answer or
return calls to their mobile telephones when PREMIUM TIMES sought to get
their comments for this story.
Mr. Obasanjo could also not be reached.
Reports of the president's comment and behaviour at the closed-door
meeting came shortly before a pro-Jonathan group, Media Network for
Transformation, circulated a statement in Abuja accusing Mr. Obasanjo of
destabilizing the PDP and asking him to call his associates to order.
'Apart from being their sponsor, the rebel governors draw their
inspiration from him,' Goodluck Ebelo, Coordinator of the group, said in
the statement. 'Apart from numerous clandestine meetings, President
Obasanjo started his public romance with the rebel flank when he became
unavoidably absent at this year's Democracy Day celebration in Abuja, but
vigorously participated in the day's activities in Dutse, Jigawa State.
That was followed by the rebel governors' visit to his Abeokuta home.'
Mr. Ebelo was not done. He continued, 'Then came last Saturday, and Chief
Obasanjo's mischief literarily flew over the Eagle Square venue of the
Special Convention. Unavoidably absent, again, he was to turn up the next
day in Church, at the Presidential Villa. Made a few platitudinous remarks
on the need for a peaceful resolution of the crisis and thereafter called
a meeting. His meeting failed and will continue to fail.
'Chief Obasanjo cannot continue to be hands of Esau and the voice of Jacob
at the same time. No arbiter, who is the guiding light of the rebels can
make peace. Peace, in this matter, will continue to elude President
Obasanjo because his activities are the very antithesis of the conditions
precedent to peace.

style="text-align: justify;"> 'Unfortunately, his eight years in office provides no road map to
resolving a political dispute. All that can be gleaned from the debris of
his time in power, are abuse of institutions of State in shutting down
dissent, hounding political opponents into prison and forcing a party
chairman to resign at gun point. Little wonder that such baleful legacy
dogs his attempt at making peace.

style="text-align: justify;"> 'President Obasanjo has to come out publicly to renounce his ties with
seven governors who are trying to impose their will on the remaining
twenty nine states and the Federal Capital Territory or acknowledge them
and be treated like them. The governors are welcome to contest the PDP
primaries, individually or present a candidate. That's democracy. But for
persons, who themselves, stood for elections for their second terms to
demand that Mr. President cannot avail himself such amenity is not only
rude but feudal.'

style="text-align: justify;"> Our sources said before the president's brief walkout at the peace
meeting, the aggrieved governors had accused Mr. Jonathan of using the
Economic and Financial Crimes Commission to hound governors and other
party chiefs considered opposed to him.

style="text-align: justify;"> Specifically, the governors, according to our sources, accused the
president of having masterminded the recent investigation of Senator
Bukola Saraki and conviction of a son of Governor Sule Lamido for under
declaring the amount of foreign exchange he was taking abroad.
The governors also reportedly asked the president to keep his promise to
run for only one term and jettison his 2015 presidential ambition.
In response, Mr. Jonathan reportedly denied being behind the investigation
of anyone by the EFCC, saying most of the investigations commenced long
before he came to power.

style="text-align: justify;"> On the request that he shuts down his presidential ambition, Mr. Jonathan
was quoted as saying he would not surrender his right to vote and be voted
for.