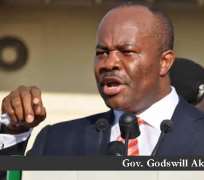 
Akwa Ibom Governor, Chief Godswill Akpabio, has enjoined Nigerian leaders to encourage inclusiveness to allow every section of the country to have a sense of belonging.

He made the call yesterday during a Gala Night in honour of the Nigeria Consensus Group at Government House Banquet, Uyo, at the end of their three-day National Political Summit on theme 'Roadmap to Political Stability and National Security in Nigeria'.

Akpabio remarked: 'We must allow inclusiveness; we must allow every section of the country to have a sense of belonging. We as leaders must live by example for the country to move forward. I believe every Nigerian child is free to live anywhere in the country without fear, for with love, we can change the country, if we love our nation we must love ourselves.

The governor who thanked the delegates for hosting the summit in the state, said he is glad that the summit was held in the state for members of the group to see that through the state, there is hope for the country.

The National Chairman of Nigeria Consensus Group, Prof. Ben Nwabueze, applauded Governor Akpabio for throwing away the insinuations that they maintain an anti-Jonathan stance.

He further commended Akpabio for the fantastic job done in the state through rapid development, saying that they are in the state to learn from the developmental strides of the state, which, according to him, shows there is hope for the country.