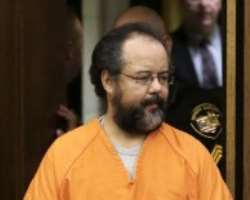 
The former US bus driver jailed for life for kidnapping and raping three young women he held as sex slaves for a decade was found hanged late Tuesday in 'an apparent case of suicide' in his closely monitored cell, authorities said.

The death of Ariel Castro, who was required to be checked on every 30 minutes, brought an abrupt and dramatic ending to a sordid case that shocked America and the world with its revelations of systematic depravity and brutality.


JoEllen Smith, spokeswoman for the Ohio prisons department, said that Castro was found hanging in a cell in which he was alone Tuesday night in a prison in the town of Orient.

'It does appear to be an apparent case of suicide,' Smith told AFP early Wednesday, declining to give further details.

But Cleveland TV station WOIO said he had not been on suicide watch. It said he had been at the Orient prison for only about 30 days. He was sentenced in August.

Officials tried in vain to resuscitate the 53-year-old, according to an earlier statement from the Ohio Department of Corrections.

'He was housed in protective custody which means he was in a cell by himself and rounds are required every 30 minutes at staggered intervals. Upon finding inmate Castro, prison medical staff began performing life-saving measures,' the statement by Smith said.

Castro, it said, was pronounced dead at 10:52 pm after he had been found hanging in his cell at 9:20 pm at the Correctional Reception Center in Orient.

'A thorough review of this incident is underway,' the statement said.

Blogs posted in the main Cleveland newspaper, The Plain Dealer, were merciless.

'Adios diablo, may you burn for 1,000 years, just like you were sentenced,' one said, alluding to his jail term of life plus 1,000 years.

'Why no picture of him hanging? Now THAT would be justice,' asked another.

'Must have used his clothing?' mused yet another.
Castro's crimes - keeping the three young women in what came to be known as a house of horrors and raping and otherwise brutalizing them for around a decade - disgusted the country and led to an outpouring of national pity for the three victims. They were abducted separately between 2002 and 2004.

A cousin of Castro, Maria Castro Montes, told CNN that perhaps there was some good to come from the death of Castro. Maybe now, she said, the victims can truly can get on with their lives and not deal with periodic new details leaking about their respective nightmares.

She added of the women he tormented: 'They would never find peace if he were still in prison.'

Montes said she found it 'hard to believe he had the courage to take his own life.'

The woman ranged in age from 14 to 20 when Castro took them off the street in a working class neighborhood of Cleveland, under the pretext he was offering them a ride in his car.

They escaped on May 6 when Berry managed to break open part of the front door and call out to a neighbor for help. Her frantic telephone call later to emergency rescue services was played and replayed over the media in the days after the three women escaped.

At the trial, as Castro - a pudgy, balding man in wire rim glasses - sat in a bright orange prison jumpsuit, it emerged that they were brutalized, sometimes chained up and kept in abysmal conditions.

Berry had a daughter fathered by Castro.
The white delapidated house where they were tormented was demolished a few days after Castro was sentenced.

At his sentencing hearing August 1, Castro had insisted he was not evil but rather addicted to sex.

'I'm not a monster. I'm sick,' he pleaded.
Despite having pleaded guilty to 977 charges related to his victims' brutal decade-long ordeal, including many rapes and the murder of a foetus through beating its mother, Castro said he was not a violent man.

He pleaded guilty after prosecutors agreed not to seek the death penalty.

Castro said he had himself been sexually abused as a child and had grown up obsessed with sex, addicted to pornography and a compulsive masturbator.

He said he had not plotted the three kidnaps, but had acted on impulse.

'I am not a monster. I am a normal person. I am just sick. I have an addiction just like an alcoholic has an addiction,' he said.

Michael Russo, the judge who sentenced Castro that day, described his crimes as unspeakable.

A tearful Michelle Knight, who was kidnapped at the age of 20, said in emotional testimony before the court that death would have been 'so much easier' for her tormenter.

'I spent 11 years in hell, and now your hell is just beginning,' Knight told Castro.