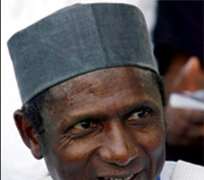 The President has chest-infections, his doctor has said. This is why he is isolated, according to the latest bulletin on his health. The report also said that President Umaru Yar'Adua is under intensive therapy.

But the leakage of the report has pitched the loyalists of the President and the Acting President, Dr. Goodluck Jonathan, against each other over plans to invoke Section 144 of the 1999 Constitution by the Federal Executive Council.

It was learnt that the report, obtained by The Nation yesterday, was the last medical diagnosis of the President's condition sent to the Acting President on February 19 before the President was brought home last Wednesday.

The report, signed by the Chief Physician to the President, Dr. Salisu A.B. Banye, reads:

"This is to inform His Excellency that the President has been receiving treatment for his pericarditis with a remarkable improvement since our arrival in Jeddah on 23rd November, 2009.

"He has however been confirmed by a team of medical specialists to have developed episodes of chest infections that necessitated his isolation and intensive therapy.

"He is now recuperating and will be discharged from the hospital as soon as advised by the medical team. He has specifically instructed me to convey his gratitude and best wishes to you and the entire people of Nigeria."

Findings revealed that the report became public knowledge following accusations and counter-accusations between Yar'Adua's and Jonathan's camps on why it was kept secret.

It was also gathered that the report was released to pre-empt alleged plans by the Federal Executive Council to invoke Section 144 under which Yar'Adua will be declared unfit to rule.

A source, who spoke in confidence, said: "The G-10 in the cabinet is set to go ahead with the invocation of Section 144. Since no one has seen the President, the group has succeeded in convincing ministers on why Nigerians must know what is wrong with their leader.

"Those loyal to Jonathan have been able to secure two-thirds of the support of members of the cabinet to invoke Section 144.

"The general feeling is that the cabinet should address the ill-health of the President by making a declaration which the Senate could act on.

"The FEC might advise the Senate to raise a five-man Medical Panel in line with Section 144(1) (a) (b) and subsection 4.

"Going by consultations in the cabinet, it will be difficult for ministers to run away from this issue."

The six-man delegation to Saudi Arabia, led by the Secretary to the Government of the Federation, Alhaji Mahmud Yayale Ahmed, is expected to submit "a report which might lay the foundation for FEC's debate on the fitness of the President".

Besides the report, the Acting President may also make the update on Yar'Adua's condition available to the FEC tomorrow, another source said.

It was learnt that the plan to invoke Section 144 has caused anxiety in Yar'Adua's camp.

A source said some governors have been working with Yar'Adua's camp to frustrate the invocation of Section 144.

But he refused to name the governors.

The source in Yar'Adua's camp said: "Nigerians should ask the Acting President why he did not release the report to the public since he received it on February 19.

"We are already aware that there is a plan to invoke Section 144. But will they be fair by not taking cognizance of the report of the Chief Physician?

"It is left to every Minister to judge Yar'Adua on his merit, in view of what he has done for them in the past.

"There is not much anyone could do because there is a game of survival in place now. Every minister wants to retain his or her seat and will bow to the desire of Jonathan.

"It will not be an easy politics to invoke Section 144 because the battle will also shift to the Senate, where the Senate President, Chief David Mark, is expected to raise a Medical Panel."

Asked of the feeling of the First Lady, the source added: "She is highly disappointed by the attitude of some ministers.

"But the First Lady, Hajiya Turai Yar'Adua, has also been appealing to the conscience of some of the Ministers to let her husband be, instead of adding to their emotional trauma."

The 36 governors are expected to meet with the Acting President today.

Although the agenda remained unknown last night, a source said: "It may be on the plan of the Acting President, the ill-health of the President, and the need to collaborate.

"Some governors might also make their views known on plans to invoke Section 144." President Yar'Adua returned home last Wednesday after 93 days in Saudi Arabia. By Yusuf Alli (The Nation)