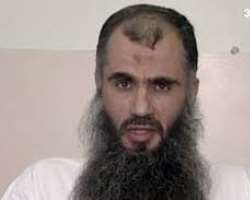 
The trial of radical cleric Abu Qatada, who faces terror charges in Jordan following his deportation from Britain, will start within 10 days, a Jordanian judicial source said Sunday.

'The state security court is scheduled to hear the first sittings in the trial of the radical Islamist Abu Qatada within the next 10 days, after the state prosecutor has finished investigating' Qatada's alleged involvement in attacks in the kingdom, the source said on condition of anonymity.

Jordanian military prosecutors charged Abu Qatada in July with conspiracy to carry out terrorist acts, after British authorities deported him from London.

If convicted on the terror charges, the extremist cleric could face a minimum of 15 years' hard labour in Jordan, the judicial source told AFP.

He added that the trial would be public and that media would be allowed into the courthouse.

Abu Qatada is currently in Muwaqqar prison, a maximum security facility in the desert east of Amman that houses more than 1,000 inmates, most of them Islamists convicted of terror offences.

He was condemned to death in absentia in 1999 for conspiracy to carry out terror attacks, including on the American school in Amman, but this was immediately commuted to life imprisonment with hard labour.

In 2000, he was also sentenced in his absence to 15 years for plotting to attack tourists in Jordan during millennium celebrations.

However, he is to stand trial again for the charges, as Jordanian law gives him the right to a retrial with him present in the dock.

Britain's expulsion of Abu Qatada came after Amman and London ratified a treaty guaranteeing that evidence obtained by torture would not be used in his retrial.

Born Omar Mahmud Mohammed Otman in Bethlehem in the now Israeli-occupied West Bank, Abu Qatada has Jordanian nationality because the town was part of Jordan at the time of his birth.