WE ARE READY FOR THE WORLD, SAYS FALCONETS’ COACH 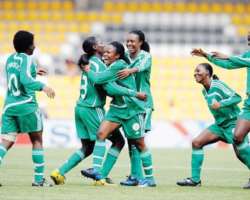 After guiding his girls to qualify for the U-20 World Cup scheduled to take place in Germany, July this year, Adat Egan, coach of Nigeria's U-20 women's team, the Falconets said his wards are ready to face the World.

'I am happy we are now at the World Cup but that is not the end of the matter; the tournament proper is a different ball game and I can say we are ready to face the challenges out there,' he said.

Nigeria and Ghana emerged as Africa's representatives to the U-20 World Cup over the weekend after defeating their respective opponents. While Nigeria beat South Africa 7-0 in the return leg in Abuja, Ghana edged Congo 3-0.

Early Preparation
Egan based his optimism on early preparation and on implementing a comprehensive programme that he would be submitting to the Nigeria Football Federation 'soonest'.

'The girls would be allowed sometime to take a break after which we would regroup to begin camping. We hope to play some quality friendly matches before the tournament proper so as to be in shape,' he said.

For Egan, getting past the quarter finals is the first target while getting the trophy would also be pursued vigorously.

Experience useful
Similarly, the coach of the last set of Falconets to the World Cup in Chile, Dan Evumena feels the team has a good chance of doing well as he pointed out that the core of the present team were with him to the last world Cup played in 2008.

'I went with a relative young team to Chile and I feel the experience most of them had in Chile would have a good bearing on the team now,' he said.

He however feels the team's chances will be clearer when the draws for the competition are conducted.

The final draw for the World Cup, Germany 2010, will take place in Dresden on April 22.

Football powerhouse
In the aftermath of the victory recorded by the Falconets over the weekend the organising committee for the tournament has sent a congratulatory message to the team for qualifying for their fifth successive world Cup appearance. In a statement on FIFA's website, Steffi Jones, president of the committee said, 'Congratulations on successfully qualifying and a warm welcome to the FIFA U-20 Women's World Cup 2010 in Germany!' 'The OC will do its utmost to make the stay in Germany for your team and its staff as pleasant and promising as possible'.

'Nigeria has long been a powerhouse in women's football with a reputation for fast, attacking play and a never-say-die attitude. Ghana will be more of a surprise package and everyone will have to be on their guard against them. It is always a special moment when new teams make it through to a World Cup, and we are really looking forward to welcoming the players from Africa,' she added.With the qualification of Nigeria and Ghana, fourteen of the sixteen participating countries in the World Cup scheduled to hold from 13 July to 1 August in Augsburg, Bielefeld, Bochum and Dresden in Germany, are now known.

The teams are: New Zealand, Japan, Korea Republic, Korea DPR, England, France, Sweden, Switzerland, Costa Rica, Mexico, USA, Ghana and Nigeria as well as host nation Germany. The South American women's U-20 championships, to be held in Bucaramanga (Columbia) between 3 and 17 March, will determine the other two teams who will take part.