Teenage boy stowed away in Arik flight to Lagos 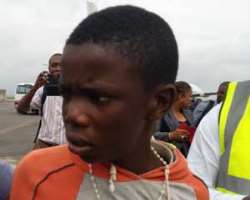 
THERE was confusion Saturday at the Benin Airport and in what seems to be a serious security breach on a local flight, as a teenage boy stowed away allegedly in the tyre hold of an Arik Aircraft from Benin to Lagos.


The teenage boy
The Aircraft with registration number, 5N-MJG Flight 44, left Benin Airport at 9am for Lagos. Top officials of the Edo state government were on board the airline. Passengers aboard the airline were shocked when security agents found the teenager at the Lagos Airport after the aircraft landed.

Though none of the officials at the Benin Airport agreed to comment on the issue, but  Vanguard observed that the teenager whose name is yet to be ascertained may have entered the airport through the Akenzua road axis due to lack of perimeter fencing at the Airport.