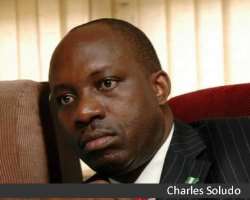 
Former Central Bank of Nigeria (CBN) Governor, Prof. Charles Soludo, this afternoon failed in his bid to reverse his disqualification from the November 16 Anambra State governorship election by the All Progressive Grand Alliance (APGA).

Inofrmation just reaching News Express has it that Soludo's suit was dismissed by the Abuja High Court which he asked to set aside his disqualification from the Anambra State gubernatorial election by the APGA screening committee.

Soludo, who was disqualified alongside five other gubernatorial aspirants, had yesterday in an ex parte motion filed asked the Abuja High Court to set aside the party's decision.

In the motion filed by his counsel, Ikechukwu Ezechukwu (SAN), the former CBN Governor argued that the screening panel's decision violated the party's constitution, as well as the 1999 Constitution of Nigeria.

He prayed the court to order the party to maintain the status quo and to grant an order of interim injunction restraining APGA from preventing him from participating in the party's primary election, pending the determination of the motion on notice. The APGA gubernatorial primary election is scheduled to holds in three days' time.