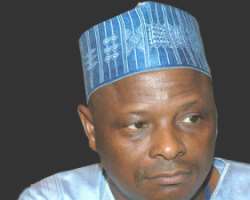 
Kano State Governor Rabiu Kwankwaso shunned President Goodluck Jonathan on Friday in Abuja, during an award/gala night organised by the National Council of Women Societies in collaboration with the Office of the First Lady.

Kwankwaso, who was one of the five northern governors that had met with political leaders on the crisis in the ruling Peoples Democratic Party, played a hide-and-seek with Jonathan, Sambo and the party's National Chairman, Alhaji Bamanga Tukur, at the event.

He refused to join other governors, who were on the same table with him when they all moved to the President's table to exchange pleasantries with him; his wife, Patience; Sambo and his wife, Amina.

Tukur and the Chairman of the PDP Governors Forum, Godswill Akpabio, were on the table beside that of the President.

Others were the acting governor of Taraba, Garba Umar, and the deputy governor of Bayelsa, John Jonah.

Only Kwankwaso and his deputy, Abdullahi Ganduje, remained on their seats.

The governor also refused to recognise the presence of the President during the presentation of awards to the governors.

All the governors who received awards, on stepping down from the podium, moved to the President for a handshake before returning to their seats.

But immediately  Kwankwaso collected his award, he looked the other way, stepped down from the podium and returned to his seat.

Meanwhile, President Jonathan has expressed the fear that he might not be able to achieve the goals of his much-talked about transformation agenda without the full participation of women.

Jonathan raised the concern in a speech at the award/gala night.

At the event, the President was honoured with a 'Lifetime Icon Award' for appointing many women into his government.

While Vice-President Namadi Sambo was honoured for supporting Jonathan's administration to empower women during the award night, the governors of Ondo, Anambra, Bayelsa, Edo, Abia, Kano and Akwa Ibom received awards for the significance presence of women in their governments.

'I strongly believe that we cannot accomplish the goals of our transformation agenda if women comprising about 50 per cent of our population are not fully integrated into our development efforts and programmes,' the President said.

He argued that the Nigerian woman is not only an important part of the nation's history, but also a part of the country's future development as a nation.

He recalled that Nigerian women had championed significant national social transformation programmes that have had an enduring impact on the well-being of the country.

Jonathan said women had been playing important and visible roles in the current dispensation in ensuring a thriving democracy and adding value to the lives of the people.

He promised that his administration would continue to take every measure necessary to bring on board the huge resources and acumen that women have to offer.

Wife of the President, Mrs. Patience Jonathan, renewed her call on the National Assembly to give legislative backing to the 35 per cent affirmative action on women representation in appointive and elective positions.

She said it was only by doing so that the gains of women in the present administration could be sustained.

Quoting from data made available by the Inter-Parliamentary Union, she said Rwanda boasts of the highest number of women parliamentarians in the world with 56.3 per cent in the lower house and 38.5 per cent in the Senate.

She said women parliamentarians in Senegal represented 42.7 per cent; Tanzania, 45 per cent; Burundi, 56 per cent and Mozambique 39.2 per cent.

She added, 'We want our men to appreciate that the women we are appealing for are their mothers, aunts, wives, daughters and sisters (PUNCH)