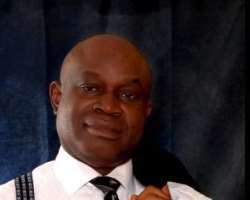 A Senior Advocate of Nigeria (SAN), Chief Emeka Ngige, has been demystified and humbled by a US-based lawyer on whom he launched an unprovoked attack on an online lawyers' forum.

Ugwuonye said in his mail:

“This afternoon, a friend of mine took the initiative to forward to your group an article I wrote for my Facebook group. The article was my opinion and personal views about the SANship title in Nigeria. I was critical of that title.

“The same friend spoke highly of this list-serve and urged me to join it. I initially declined because I had so many mail to attend to already and I was afraid that joining would expose me to more mails. However, my friend subsequently forwarded to me the reactions of your members to my article on SANship.

“As expected, some of you criticized my article for one reason or the other. But surprisingly, one SAN, Emeka Ngige, took it personal and attacked me viciously. What he did was to post a piece written by my sworn enemy (a group I have sued for defamation), Sahara Reporters. In that article by Sahara Reporters, I was called a rogue and embezzler and a convict out of a civil case over fee dispute between counsel and client.

“Emeka Ngige never actually read the judgment of the court. He merely treated the report of Sahara Reporters as the judgment. When I saw that I laughed because it confirmed the views expressed in my article on SANship; that some of them are idiots and do not deserve the privileges they enjoy. Emeka Ngige exemplified the segment of that group that are indeed idiots. He is a SAN but he does not realize that a civil case does not lead to conviction for fraud and the other nonsense Sahara Reporters reported.

“I would withhold further criticism of Emeka Ngige because his sister is my friend and a former colleague in Maryland. She was a fine lawyer until she was disbarred due to the vicissitudes that befall lawyers in America. She is 10 times a better lawyer than Emeka Ngige. For him to attack me in the manner he did tells you all there is to know about him. That man is not in any position to question my moral or my ethics. If I were to be given even a minor opportunity to scrutinize him, I would very likely show him to be a little crook with hands in many shady deals.

“I am pleased to join your group. My views on SANship remain. There are good lawyers among them. But there are rogues and nitwits among them too, as has been shown so clearly by the actions of Emeka Ngige today, a fool that does not know he is a fool.

“By the way, anyone here who dares to speak about the failings of Emeka Ugwuonye should point at one court order or judgment upon which he speaks. It is a total disgrace that lawyers should rely on Sahara Reporters (a sworn enemy of mine for 4 years) to judge me. None of these lawyers (I am sorry if I generalize) would meet my ethical standards. Shame on any lawyer who equates a tabloid gossip with a judgment of the court.”