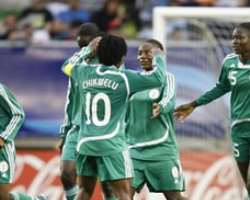 Falconets of Nigeria on Sunday picked one of Africa's tickets to play at the under-20 World Cup scheduled for Germany later in the year after whitewashing their opponents from South Africa 7-0 at the National stadium, Abuja.

The scoreline gave Nigeria a 12-2 aggregate after winning the first leg 5-2 two weeks ago in South Africa.

Nigerian girls went straight to business from the blast of centre referee's whistle and got the opening goal in the first minute through Ebere Orji.

Ebere Orji made it two, nineminutes later, before Glory Irika scored the third goal in the twentieth minute.

Glory Ofoegbu made it four for the Falconets in the thirtieth minute before Glory Iroka hit her brace five minutes later.

It became a dig dong affair afterwards for both sides until half time.

On resumption of play at the second period, the Falconets went on rampage scoring two extra goals through Ugochi oparanozie and Uchechi Sunday to humiliate the South Africans.

With this result, Nigeria has joined Ghana who earlier beat Congo DR 3-0 to represent Africa in Germany.

After the match, Coach of Falconets, Evan Adat, told Daily Sunsport that the ticket was won in South Africa a fortnight ago and set a target for himself. ' The best this team had ever done at the World Cup is getting to the quarter final. But I 'm setting a target for myself and the other members of the team.

The worst result I will get in Germany will be getting to the semi final and I think it is not a hard task with the calibre of players in this squad.

We have to begin preparation immediately to avoid distraction.