TIN GOD: THE MACABRE DANCE OF THE NATION NEWSPAPER 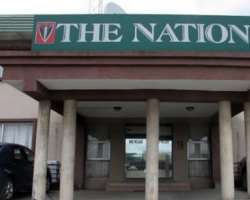 The Nation Newspaper in its edition of August 8, 2013 published a shocking and mischief-laden editorial with the title, “Tin god.” It was a brazen, jaundiced, politically motivated and malicious attack on the Governor of Akwa Ibom State, Chief Godswill Obot Akpabio CON. Not only did the editorial try to hide its bias and ill-intention, it also laboured to dredge up falsehood and misrepresentations about Governor Akpabio and some political developments in Akwa Ibom State. In a simple sentence, it was the height of editorial recklessness and irresponsibility.

Those who understand the quicksand of Akwa Ibom politics understood the narrative. A few weeks ago, Senator John Udoedeghe, had publicly declared his interest in the 2015 Gubernatorial Elections – like he did in 2010. Shortly after he declared in 2010, the Nation picked up the gauntlet and launched a sustained propaganda (driven by serial editorials, reports and features) against the Governor, the Government and good people of Akwa Ibom State. They did not let up until the people of Akwa Ibom State overwhelmingly put paid to their mischief in the 2011 elections when Governor Akpabio roundly defeated their sponsored candidate and won all the resultant lawsuits up to the Supreme Court.

The scenario is, therefore, familiar and we see in this political macabre dance the voice of Jacob and the hands of Esau. Even the illogical themes canvassed in the Nation’s unfortunate and jaundiced editorial, which bias for the ACN (now APC), is public knowledge by virtue of its ownership, had earlier been expressed by Senator John Udoedeghe in a recent interview in the same newspaper.

Posturing as knights of truth, the Nation in the said editorial ended up as agents of falsehood – particularly in their reference to the recent change in the office of the Secretary to the State Government. The editorial wrote, “How does one explain the recent gangster-like method of removing the former Secretary to the State Government (SSG), Umana Okon Umana from office.” With the benefit of a little goodwill and investigation, The Nation should have known that it is the prerogative of the Governor to appoint and make changes in the office of the Secretary to the State Government without reference to the legislature. They should also have known that at the time they alleged that armed security details “stormed” Umana’s office to “sack” Umana, neither Governor Akpabio nor Umana was in Akwa Ibom State. So since Mr Umana Umana was in far away Abuja, how then could one, with good intention, claim that he was forced out of his office by armed security men?

Perhaps we should educate the Nation that security presence within the Governor’s Office Complex which also houses the offices of the Governor, Deputy Governor, Secretary to Government and Government House administration including the Accounts Department is traditional. Therefore, if the security agencies decide, in their wisdom, to beef up security in Government House does that call for an editorial?

Following the declaration of Mr Umana’s gubernatorial ambition for 2015 election and commencement of campaigns as widely reported in the media on July 25, 2013 and his non-refuttal of same, Governor Akpabio sought advice from relevant electoral and constitutional experts. He was advised that he was duty bound by his Oath of Office to defend the Constitution (which includes the provisions of the Electoral Act which forbid public officers from declaring for electoral office while still in office). He, consequently, requested for Mr Umana’s resignation to enable him (Umana) pursue his stated interest in the 2015 Governorship Election.

The editorial disingenuously claimed that when Chief Akpabio was a commissioner in the cabinet of Governor Victor Attah, and declared for the governorship, Obong Victor Attah did not sack him. This is a blatant and outrageous lie!!! Throughout the time Chief Akpabio served in Obong Attah’s cabinet, he never for once publicly declared interest in the governorship of the state. He only made his declaration after he duly resigned from office as Commissioner of Lands and Housing on November 24, 2006. He declared thereafter on November 26, 2006. This was a clear evidence of the Nation’s undisguised bias!

One would have expected the media (the watchdog of society and the Fourth Estate of the Realm) to applaud such an action in defence of the constitution and the rule of law. Instead, they resorted to name calling (tin god, gangster, oracle, clowning, unashamedly etc) and the use of innuendoes and foul language in violation of all known principles of responsible editorial writing. The editorial was so unbalanced that it became a cross between an undertaker and a defence lawyer’s brief.

In their bid to impress their paymaster, they even threw in the issue of Mr. Nsima Ekere’s resignation as the Deputy Governor of Akwa Ibom State. This was in spite of the fact that Mr. Ekere duly resigned in a letter dated October 31, 2012 for personal reasons and cited relevant sections of the Constitution to support his action.

The Nation should also be reminded that several deputy governors have either been impeached or voluntarily resigned from office in some states of the federation, and those were not of interest to The Nation to write Editorial opinion on. Cases abound in the South-West zone where those who clearly won National Assembly tickets were replaced with family members, in laws, market women and wives, and yet The Nation never devoted even a single line of its editorial to those travesties.

May we also ask The Nation where it was, when the defunct ACN leadership went on imposition spree of governorship candidates in the South-West and the result of that undemocratic decision is now tearing the party in the zone into umbrella shreds as 2015 draws closer. From Ekiti to Ogun and Oyo, there are serious threats to the existence of the party because of the decision of some lawmakers to kick against imposition which is the trade mark of the party. These are issues, which The Nation should have written editorials on , yet they chose to be blind to the undemocratic tendencies of the APC because that is where its bread and tea is buttered.

Perhaps the most ludicrous of this infantile editorial was the claim that Governor Akpabio attempted to recall Senator Alloysius Etok. It is on record that when Senator Alloysuis Etok embarked on his campaign of calumny, Governor Akpabio never joined issues with him. In fact, it was Governor Akpabio, while in Canada attending an Investment Summit, who impressed it on the leadership of the Peoples Democratic Party in the state to stop the irate people of Ikot Ekpene Senatorial District from the recall exercise, which the people had commenced. A statement by the PDP on this issue was published in major national dailies. So how could the Governor who laboured and toiled by pleading with the people of the Senatorial District to re-elect Senator Etok turn around to ask for his recall? This is another puzzle the editorial could not crack.

The Nation is continuing a regime of falsehood that followed Senator Etok’s vitrolic outbursts. It would be recalled that a thug fooled Senator Etok into parting with his money on the claim that he was a hired assassin who was paid by the Akwa Ibom State Government to kill him. The thug was eventually arrested by the SSS and it turned out that Senator Etok either did not get his acts right or fell for his cheap tricks - like The Nation is falling for the cheap tricks of their paymasters. The Nation newspaper should note that the SSS paraded the deceitful thug and eventually charged him to court.

The reference to Governor Akpabio allegedly rigging the primary election in favour of Senator Etok is lame and baseless. The Governor had on countless occasions explained that he supported the emergence of Senator Etok in a pre-primaries conclave, which presented him for the party primaries. This was the first time in the history of Nigeria that someone from that Federal Constituency (Ikono/Ini) – a minority group in the Senatorial District - was to be elected to the Senate in the spirit of inclusiveness. Senator Etok contested and won the primaries and subsequent general election to emerge the Senator. We wish to state for the umpteenth time (fully conscious that The Nation newspaper may fail to hear this) that Governor Akpabio never rigged any election!

The Good Book says “to the pure all things are pure.” Those who have a tin god, tend to think that tin gods exist everywhere. In Akwa Ibom we have no tin god, so we advise The Nation to look inwards for their tin god. Governor Akpabio is the product of the people of Akwa Ibom State and he has acquitted himself creditably in the execution of his mandate since his assumption of office in 2007. His sterling performance has earned him honours and accolades from some of the most respected and reputable institutions within and outside Nigeria.

We believe that honour should be given to whom honour is due. We regret that in a bid to please their paymasters and displease the public, a newspaper like The Nation could embark on such reckless and irresponsible editorial. It is lamentable that The Nation newspapers would engage in such anti-social treatise. We urge them and indeed the media to exercise more commitment to social responsibility, truth and fairness in the discharge of their duties. This is the only way for the media not to become tin gods.