2015: BETWEEN THE DEVIL AND THE DEEP BLUE SEA 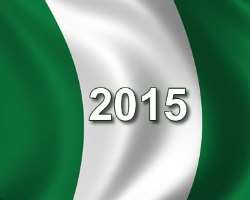 In the days of yore, when schools were still schools, this would have made an interesting topic for a debate or impromptu speech competition of any school’s annual Literary And Debating Day. But then, just like many good things that have depreciated in our land, schools are no longer what they used to be, and it is “debatable” if there are still days set aside for literary and debating events / competitions.

The literary giant, Chinualumogu Achebe asserted as far back as 1983 that, “The trouble with Nigeria is simply and squarely a failure of leadership. There is nothing basically wrong with the Nigerian character. There is nothing wrong with the Nigerian land or climate or water or air or anything else. The Nigerian problem is the unwillingness or inability of its leaders to rise to the responsibility; to the challenge of personal example with are the hallmarks of true leadership.”

Some however argue that followership is rather the problem, that the past and present leaders definitely emerged from the crop of bad followers and therefore, the leaders were products of a dysfunctional followership. Only a terrible followership could have consistently produced disappointing leaders that Nigeria has been bedevilled with. Something is therefore fundamentally wrong, one may conclude, with this system which continually produces bad leaders.

2015 is just around the corner and the war drums have started to be beaten. The gladiators are the ruling party and the newly registered leading opposition party. We have started hearing the electoral jargons – capture, defect, decamp etc. According to Mr Fix-It, while on a visit to a former president, the ruling party will continue to win, using its time-tested formula. Is your guess as good as mine?

Before the euphoria of the APC’s recent registration dies down, it is imperative to warn fellow Nigerians that “it is not yet uhuru (freedom)”, even though the son of the late Kenyan president, Jomo Kenyatta, who coined the expression, is the current Kenyan president – Uhuru Kenyatta. Without much ado, the difference between APC and PDP is like between six and half a dozen. It is like the proverbial choice between the devil and the deep blue sea.

Let’s face it, there are very good people in APC, and so are there some very controversial people. So much just like PDP. There is no vice that you will find in PDP that is not inherent in APC. You will find in APC people who are spartan, and waged war against indiscipline and corruption, just as there are those whose source of stupendous wealth is shrouded in mystery. Some of their leading lights have not discharged themselves equitably in their business and personal dealings but want to be trusted with the national treasury. One of their prominent leaders even used religion to justify his marriage to an under-aged girl of exotic species. Another was even an accidental public servant while yet another was the famed anti-corruption czar.

Talking of the ruling PDP, most rational people have long given up on the party. A party that could make barking, raving dogs out of a Ph.D holder and a medical doctor, both from an area that first got in contact with the missionaries / western education in the country, is probably beyond redemption.

So what choice is there then between the devil and the deep blue sea? Some would readily assert that the “the devil you know is better than the angel you do not know”. My own take is that from all their antecedents, perhaps the lesser evil should be experimented with for now. It could be likened to two students, one with a score of 39% and another of 25%, which are both failures in undergraduate courses but clearly the former had outperformed the other by one-and-a-half times. Change is said to be the only permanent thing, so it is imperative we use our voting powers to change our leaders from the worst set to the worse, so as to send the right signals to our current lameduck leaders that they can be dispensed with, and further encourage good materials to come out and eventually change our situation to the the bad, then the good, then the better, then eventually the best.

I wonder if any of our living past and present leaders would attract so much goodwill, prayers and best wishes like the Madiba, Nelson Mandela, has done in his current fight against lung infection. I dare say most, if not all would rather attract curses or at best indifference while on sick beds. And I am certain that they would not be admitted to hospitals in Nigeria. That is a food for thought.

I really have neither admiration nor respect for leaders who could not say “Amen” to anti-corruption prayers, or who do not give a damn about being open about their self-worth (they must have something to hide if same was publicly declared four years earlier – what has changed?), It is such disdain for ordinary citizens that have made average performances of the likes of Governor Babatunde Fashola and Speaker Aminu Tambuwal the talk-of-the-town, rather than one-eyed kings in the land of the blind which they truly are.

When elections become truly free and fair, most of the charlatans in the corridor of power will not get there in the first place. Nigerian voters showed their sophistication on June 12 1993, where the son-of-the soil lost in his polling booth in Kano. This was also repeated in 1999, where the son-of-the soil similarly lost in his polling booth in Abeokuta. When we get the electoral process right, where true winners are declared, that will be the very first step towards Nigeria’s re-discovery. This puts a lie to the zoning mentality. To choose a leader based on accident of birth is the greatest error any society could make. No one has ever had a choice as to where he would be born or to whom he was born. I have not seen anyone in need of the attention of a surgeon or a medical specialist insisting that only the ones from his tribal enclave must be the best. Similarly, I have not seen any air passenger who chooses flights based on the ethnic origin of the pilot. A leader Nigeria needs now can be likened to a pilot or a surgeon. An error in choice could be fatal. Competence, rather than ethnic background, should be the selection yardstick. I believe the average Nigerian voter would vote for competence over tribal affinity. Perhaps if the USA and France had adopted zoning, Obama, Sarkozy and Rawlings, whose fathers were of different nationalities, would never have had presidency zoned to them.

The next steps for the next administration will be creation of an enabling environment for job-creation, starting with fixing of electricity, which has defied all solutions up till now. There must also be reforms in the educational system, police, law enforcement / judicial administration and transparency in governance. There must also be emphasis on enhancing the productive base of the economy, especially agriculture. The quick wins will be the drastic reduction in, and curtailment of the very high recurrent expenditure, which arose via the ridiculous and embarrassing legislative and executive jumbo salaries and allowances, as well as abolition of security votes.

As we march towards 2015, the opposition should be reminded that those who have held the nation captive would not let go easily and willingly. Just as Mugabe has defied all machinations to leave the scene long after the ovation was loudest, the Nigerian Pharaohs have deeply entrenched themselves for the past 14 years, so no one should be deceived that they will leave on their own terms. The leading opposition group must therefore come up with a fool-proof strategy to win voters’ endorsement and also counter rigging. The other fringe opposition groups like Labour party and ideology-based parties like Gani Fawehinmi-founded National Conscience Party need to make deliberate efforts to start wooing the youths and the disillusioned in order to become the new future opposition and perhaps another government-in-waiting in years to come.

I wish to remind our present crop of leaders of the quotable quote by Dele Giwa, the celebrated journalist, editor and founder of Newswatch magazine, who was killed by a mail bomb in his home on 19th October 1986 - “No evil deed can go unpunished. Any evil done by man to man will be redressed. If not now, then certainly later. If not by man, then by God, for the victory of evil over good can only be temporary."