Analysis: How France's Hollande Plans To Win His Bet On Jobs 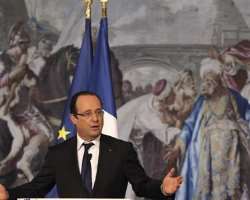 Defying all predictions by the IMF, the European Commission and the bulk of private economists, President Francois Hollande is still banking on a turnaround in French unemployment by the end of the year.

Not only that, he has upped the stakes by making it the top political priority of his Socialist government. "I will be judged on it," he told the nation in a Bastille Day television interview last month.

It is no secret that he plans to use a variety of state-subsidized temporary jobs and training places to ease the strain on jobless claims totals that hit an all-time record of 3.28 million in June.

The first test of his plan will come directly after France's August summer break - when his government believes it will confound the skeptics and start to chip away at jobless totals.

"Taken together, these measures will have a major impact over the period up to the end of the year. It will make itself felt on the unemployment trend," said a government source.

Hollande's plan is simple. Although he insists the French economy is already pointing up after two successive quarters of slight shrinkage, he accepts that it will still not generate enough growth to create jobs until the second half of next year.

Hence the plan to stimulate the jobs market right now.

When French children return to school in September, they will be welcomed by an army of 30,000 new classroom minders and playground assistants in many cases taken straight from the dole queues. Such public sector posts are a category of jobs whose average duration will be doubled to 12 months.

Add to these the so-called "jobs of the future" which the government will fund to help unqualified youths aged between 16 and 25 take up jobs in the health, charitable and other non-commercial sectors.

After a slow start, the government estimates 2,500 such contracts are now being signed a week and expects to get close to a year-end target of 100,000.

The third major lever will be a new tranche of training schemes aimed at matching the unemployed with the several hundred thousand job vacancies currently unfilled in France because of a skills mismatch. Hollande expects to fill 30,000 such posts this year and 70,000 more in 2014.

Finally, Hollande wants to encourage the private sector to take on 70,000 young people by giving companies financial incentives to train a young worker to replace an employee heading into retirement.

COOKING THE BOOKS?
There is no official forecast for how many jobless claims will be wiped out by these measures. Nor has the government disclosed the overall cost of the scheme, which will depend ultimately on how many jobs are taken up.

National statistics agency INSEE has forecast that unemployment will keep increasing throughout the year to hit 11.1 percent by year-end, just shy of the record 11.2 percent of 1997, with the state-subsidized jobs slowing the increase but not enough to actually cut the unemployment rate.

But some economists agree the arrival on the market of subsidized jobs could allow Hollande to win his bet by announcing a drop in unemployment from September onwards.

"You can't exclude the possibility of the government playing skillfully with the calendar," said Olivier Passet of Paris-based private economics research institute Xerfi, which in a June poll by Reuters was among the majority of forecasters who predicted Hollande would miss his year-end goal.

"It could turn out the figures announced look pretty good."

Others are less convinced.
Marie Diron, Director of Macro Forecasting at Oxford Economics and also among those who in June doubted that Hollande could win his bet, forecast the subsidized jobs would not be enough to turn the overall tide of the labor market.

"We are concerned about low corporate margins and we think companies will focus on restoring profitability," she said of further expected lay-offs, forecasting that unemployment would continue rising until early 2014.

Among the factors Diron said could work against Hollande are the fact that many subsidized jobs will go to those who would have found work anyway, especially after eligibility criteria were loosened. Separately, the continued growth in the French labor supply tends to inflate jobless claims, she said.

Even if Hollande does manage to announce a statistical fall in the number of unemployed between now and the end of the year, critics will accuse him simply of cooking the books with artificially created jobs that will not last.

But Hollande is unrepentant. The second part of his wager is that a recovery will, by the middle of 2014, kick in enough to create employment by itself. Economists have tended to put that rate at 1.5 percent, but the government thinks otherwise.

"Unemployment can start to ease by itself in France at a growth rate of around one percent," said the government source.

While the government expects to revise down its full-year 2014 growth forecast of 1.2 percent, it hopes the marginal rate will be faster than that by mid-year -- not least because it will have started releasing 20 billion euros in tax breaks to businesses in return for hiring new employees.

"Politics is not magic," Hollande told the Bastille Day television cameras. "It is will."