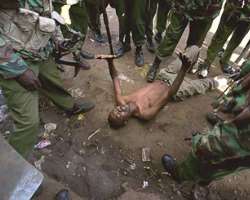 Somali Rights investigators in the field have discovered what they termed as 'Kestapo' which is the Kenyan version of Gestapo. "Kestapo" is a secret and rogue deadly unit comprising of former convicts, current notorious gangs, members of the Mungiki sect, and corrupt intelligence officers under the shady payroll of Nuradin Yusuf Haji, the second in command of the Kenyan Intelligence Directorate and an ethnic Somali who takes direct orders from Kenyan President Uhuru Kenyatta on the operations of this criminal outfit.

Kestapo has a very significant role in the genesis of Kismayo Massacre. This same unit was also used in 2008 by Mr. Kenyatta to kill non-Kikuyus in Kenya. Somali Rights team members have been working closely with the international community and discontented members of the Raskamboni militia to extract crucial evidence linking the role of Kestapo in the current and pending cases of crimes against humanity that Mr. Kenyatta faces at the International Criminal Court.

This discovery makes yet the clearest connection between the charges of crimes against humanity that Mr. Kenyatta faces at the International Criminal Court and newly filed charges of massacre, rape, pillage, destruction of property and ethnic cleansing in Lower Jubba region of Somalia.

Somali Rights has submitted a dozier containing all the new evidence to the International Criminal Court and is compiling a report on the dangerous web of Kestapo to expose the contradiction between the peacekeeping role declared by Kenya and the ulterior agenda of ethnic cleansing to create a buffer zone in Southern Somalia.