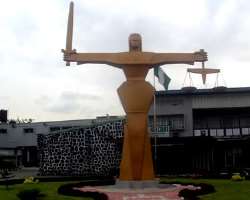 Barrister Felix Morka is the Executive Director of Social Economic Rights Action Centre (SERAC). This non-governmental organization was established in May 1995 in Lagos. It was a non- partisan organization set up to provide succor for common people in the world. Felix Morka is a renowned lawyer of the 21st century knowledge to the core and a Harvard product. He had his LL.M degree in Harvard law school before coming to Nigeria to provide social and economic freedom for the poor masses. Felix Morka is from Delta State of Nigeria. He is one of the distinguished and refined lawyers who believe that law can be practiced in Nigeria with integrity without corruption if the Judiciary can abide to the system. He is the leading advocate for economic, social and cultural rights. He is a Board member of ESCR- Net as the legal officer for Africa of the Washington, D. C based international human rights law group where he conducted and participated in key projects in Malawi, Kenya and Nigeria.


Barrister Felix Morka is a known lawyer with dignity who is always preparing to defend the defenseless across the globe. In Ethiopia, Morka took part in a major field study of the country’s judicial system and of the human rights organization in India and South Africa studying housing rights groups engaged in the defense of the country’s slum dwellers, squatters and urban poor. Felix Morka has presented testimonies before the United States Congress and Senate of the state of New Jerseys and meets regularly with policy makers to raise human rights. He is the immediate past chairman of the body shop international Human Rights Award jury and serves on the advisory boards’ international Human Rights Internship program. He is presently a senior jurist Doctor (SJD) candidate at Harvard law school.

In recent interview with the incorruptible lawyer, Felix Morka, he berated the state of the judiciary system and why corruption continues to play a destructive role in the lives of the so-called political leaders and jurists in the country. The leadership of the country can be totally restored if the masses prepared for change in 2015. We need the collective political association to help in building the Nigeria’s democratic process. Democracy is not about politicians but people represented. I have defended the common people across Nigeria and Abroad.

The so-called debauched corruption has eaten deep into the fabric of the society and lawlessness among political leaders is one of the problems plaguing the country. What we are experiencing in some of the African countries as revolution in Tunisia, Syria, Egypt and others could happen in Nigeria, if political enlightenment is being put in practice. Our people here are still crawling with democracy dividends of sit and look. We have retarded democratic system that is why even our so-called police are not respecter of the law. Nigeria needs political awareness of the leadership which would help to vote out corrupt leaders out of power come 2015 if we desire for real change. Poverty has been the bedrock of leadership failure in Nigeria because the masses refuse to take their destines into their hands. Nigerians need social consciousness over failed leaders and nothing else. Nigeria needs capacity building and values to fix the country’s leadership structure.

Barrister Felix Morka has granted many electronic and print media interviews all over the world for fighting for freedom for common people. He is one of the prominent Nigerian lawyers that has first class regards for the legal system. He has frontally and digitally fought over the state of corruption in the Nigeria judiciary system over the years and ready to put a stop on judgments that are not worthy to be celebrated.

Felix Morka is an extra-ordinary lawyer with Harvard experience which makes him different from other Nigerian lawyers with his expository law knowledge in the world. He is a lawyer that is ready to serve the common people without hesitation. His major calling into the legal profession to defend the poor masses and that is why Social and Economic Rights Action Centre remains one of the notable non-governmental organizations in Nigeria and the world. Today, Felix Morka is a household name in the legal profession. Felix Morka is playing a great role which the Late Chief Gani Fawehinmi played before his demise to the eternity. He has saved many people from government rigid policies and others. As a Harvard product, Felix Morka knows the exact law which will help the Nigerian judiciary system to operate freely without corruption. Felix Morka is not carried away by the largesse of this world but ready to provide succor for the downtrodden Nigerians.


He is a lawyer of lawyers, advocator of advocators, Human right activist of activists, thinker of thinkers, freedom fighter of fighters and others. Felix Morka is an intellectual lawyer whose pedigree and exposure is enough to provide sound leadership in the country. He deserves to occupy a political position in the country because credible people like him must be voted into power not thieves. He is a trained leader with cognate experience to take Nigeria’s democratic system to the Promised Land. He is happily married with children.