Delta Central: I've Not endorsed Anyone Yet – Uduaghan 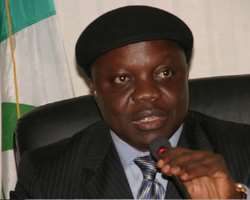 
Governor Emmanuel Uduaghan of Delta State has said that he has not endorsed any candidate for the forth coming Delta Central Senatorial election in the state.

Uduaghan who disclosed this Friday when he addressed Deltans that came to felicitate with the newly sworn-in Judge of the Customary Court of Appeal and chairmen and members of the newly inaugurated Board of Internal Revenue and Advisory Council on the Prerogative of Mercy in Asaba, said he has not anointed anybody as his preferred candidate for the senatorial seat as it was the responsibility of PDP members in the senatorial district to nominate a candidate acceptable to all of them.

He advised all interested candidates to go to the field, work hard, meet all members and fight for the nomination as he was prepared to campaign for any candidate of the People's Democratic Party (PDP) nominated by the people of the Senatorial district .

'I have not anointed anybody for the forth coming election in Delta Central Senatorial District. Any candidate that wants to vie for that position must be nominated by PDP members from the district and should be a candidate acceptable to all members of the district. We are ready to come out to campaign for that person,' he said.

Governor Uduaghan noted that plans were already in top gear to conduct local government elections in the state as the State Independent Electoral Commission was set to deliver on this responsibility.

He promised to lead the campaign for the Peoples Democratic Party candidates in that election.
He informed the gathering that the list for appointments into Boards of parastatals and agencies was ready and would be released within the next two weeks

While reiterating his administration's commitment to the empowerment of youths and women in the state so as to better the lives of Deltans, Governor Uduaghan announced plans to increase the number of members of the Local Government Women and Youth Empowerment Development Committees in the next few weeks.

He also explained that the state has embarked on other empowerment scheme like the Transport and Environment Marshals schemes to provide jobs for the people of the state.

The governor who informed the gathering that he has charged Local Government Transition Committees to judiciously use the SURE-P funds to empower the people at the grassroots level promised to take on the issue again next week at his meeting with the Local Government Chairmen.

'We will soon increase the membership of the state youth and women empowerment development committees to enable them make an impart on the people. I have also charged the Local Government Transition Committee Chairmen to ensure that they empower their people at the grassroots. They should judiciously use the SURE-P funds given to them. I intend to take the issue again with them next week when I meet with them'.