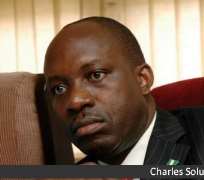 
Indications are rife that Peoples Democratic Party (PDP) candidate in the February 2010 governorship election in Anambra State, Prof. Chukwuma Soludo is eyeing the All Progressive Grand Alliance (APGA) ticket, for the November election.

Sources close to Soludo, a former Governor of Central Bank of Nigeria (CBN), told Pointblanknews.com that the economist-turned politician was “discussing” with APGA on the possibility of becoming their flag bearer.

The 53 year-old aspirant, it was gathered, would buy the APGA nomination form “in a few days time.”
Pointblanknews.com could not however determine if the form would be sourced from the Victor Umeh or Maxi Okwu factions of the party.

Umeh had, on the heels of a recent judgement from a court of appeal, published in a national daily, his party’s timetable for the forthcoming election.

In the timetable signed by the faction’s national secretary, Alhaji Sani Shinkafi, the party advised aspirants to pick expression of interest forms after parting with N2 million “non-refundable fee.”

However, in a swift reaction, Okwu issued a disclaimer warning all intending APGA candidates not to pay any monies to any group other than his.

'The authentic APGA leadership with Barr. Maxi Okwu as National Chairman dissociates itself from the fake timetable and N2million fee imposed on aspirants and warn party members to be wary of the antics of Shinkafi and Chief Victor Umeh, who are yet to account for over N400 million sales of nomination forms for the 2011 general election,” Okwu had warned.

According to Okwu, “the real reason for the hasty release of the fake timetable is to hoodwink unsuspecting aspirants to pay the N2 million non-refundable expression of interest form when INEC is yet to decide on the authentic APGA leadership following two contradictory Court of Appeal judgments, one upholding the 8th April, 2013 popular national convention which produced the Okwu-led executive while the other purportedly restored Umeh as chairman.”

Pointblanknews.com further gathered that Okwu’s statement may have rocked the calculations by Soludo, and that his handlers have advised that “all plans to purchase nomination forms be put on hold.”

Sources close to Soludo confided in Pointblanknews.com that the looming presence of incumbent Senator Andy Uba in Anambra PDP, coupled with the intra-party crisis, drove the aspirant to find an alternative platform.

Senator Uba, who is from the same Aguata council as Soludo, is also believed to be eyeing the Anambra Government House.

In the February 2010 election, Soludo, a favourite of the then First Lady Turai Yar’Adua, was awarded the PDP ticket even though Uba’s election, in 2007, was voided by the Supreme Court.

Soludo’s nomination had sparked acrimony in Anambra PDP, forcing Uba out to contest the same election on the platform of Labour Party (LP), thereby splitting what otherwise would have been PDP votes.