Mark: State Creation Not Yet Foreclosed 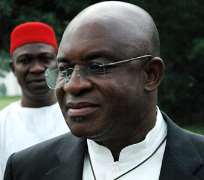 SAN FRANCISCO, July 28, (THEWILL) – The President of the Senate, Senator David Mark, has assured that the issue of state creation in the ongoing constitution review is not yet foreclosed, “because there is still a window to address the issue.”

Giving the assurance while speaking with his constituents under the aegis of Idoma National Forum (INF),Mark said the draw back in the recommendation was that Chapter 8 of the 1999 Constitution made it cumbersome to actualise creation of State.

He however assured that the system is being streamlined to enable advocates of state creation to meet their targets.

“I have never minced words about my position for the creation of additional States. It is not that we cannot live together with our brothers and sisters but I am a firm believer that State creation will bring more development and progress nearer to the people.

“You should continue with the agitation for state creation and work towards meeting the requirements. I am sure that when the conditions are met, States would be created.

“Milk may have been spilled but not fallen over. There is still a window and the National Assembly will hearken to the yearnings and aspirations of the citizenry,” he said.

The Senate President asked his people to continue to maintain peace and unity which, according to him, engenders progress of a people, adding “your strength is in your unity.”

He promised to continue to be good ambassador of Idoma nation, Benue State and Nigeria at all times, saying his actions and deeds would be guided by the fear of God, fairness, objectivity and the rule of law.

Speaking earlier, the INF President, Dr. Okopi Alex Momoh, urged the National Assembly to review requests for the creation of States, pointing out that with over 61 requests to that effect, something must be wrong with the management of States in the country.

He urged the National Assembly to investigate and verify the claims for state creation in order to address the issue and feelings of most Nigerians.

He lauded the Senate President for providing quality leadership in the Senate and being a worthy representative of the Idoma nation.

Momoh pledged that the INF would partner with the Senate President in the onerous task of developing the Idoma nation for the good of all.