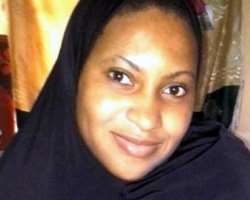 Her father accused the Estu Nupe Alhaji Yahaya Abubukar, of hypnotizing his daughter, who has since changed her name to A'isha, to embrace Islam. A'isha, who hails from Asaba, Delta State, came to Abuja at the age of 10 when her father relocated from Lagos.

After her secondary school education at Army Day Secondary School Asokoro, Abuja she got admission into Federal Polytechnic, Bida to read Public Administration. She, however, withdrew from the course in her first year. She embraced Islam on February 15, 2013. A'isha said since her family relocated to Suleja, Niger State, she has been in the midst of Muslims, which accorded her the opportunity to have several Muslims friends and learnt a lot about Islam.

The travails of A'isha began when she ran to the Estu Nupe's palace in Bida on March 1, this year to seek protection against any aggression she may face should her family know about her conversion to Islam. This led to a controversy that is still ongoing, with her father accusing the traditional ruler of kidnapping his daughter.

Along the line, several meetings were organized between A'isha and her father Pastor Uzoechina and his daughter at the instance of the Estu Nupe, who also involved some members of the Christian Association of Nigeria (CAN).

But despite that, A'isha refused to follow her father, alleging that he has threatened to deal with her by taking her away to a place that she will not be able to practice her new religion. A'isha has taken the matter to a Shariah court in Bida and the court is expected to rule on August 1, 2013 whether or not the 25-year-old should be released to her parents or not.

Excerpts: What is your name?
Aisha Uzoechina: I was formerly known as Charity Uzoechina and now A'isha Uzoechina. Why the change of name? I changed my name because I have accepted Islam.

What brought you to Bida?
I came to Bida in 2012 to read Public Administration at the Federal Polytechnic, Bida.

Are you still a student of Federal Polytechnic Bida?

No, I am not. I have withdrawn from the school.
Did you go back home?
No, I did not go home. At the beginning I was planning to go back home, because I wanted to tell my father that I have converted to Islam. When I converted, I was afraid to tell my parents, because of the way my father would behave. I know he will not take it lightly with me. So, for that I refused to go back home.
Did anybody force or enticed you to join Islam?

I joined Islam on my own. Nobody enticed me with anything to join Islam. What informed your decision to join Islam? I converted to Islam because I love the character of Muslims, particularly the way they behave. You know Muslims believe in God. I have Muslim friends and I watch what they do, that enticed me to join Islam. I used to read Qur'an when I was a Christian. I always join them to read Qur'an and through that I found out that it is the same one God they worship. So I embraced Islam.

How did your father come to know about your change of faith?

When I ran to the palace, I told you, it was very difficult before I could see the Emir. When I saw him, the emir refused to accept me, because my father did not know about it. He, therefore, collected my father's number from me and called him. The following day my father came and said he wanted to see me. When we met we talked one on one.

What did you tell him?
Well the emir told him that I have converted to Islam. When my father talked to me, he said let's go home, but I refused. I told him that I will not change my faith, because I have already accepted Islam and this is where I want to stay. He, therefore, threatened me so much so that I became scared of him.

What did he do to you amounting to a threat?
In the first place you know, I put on Hijab (veil), he said I should remove the Hijab. He was angry and used some harsh words on me, directing that I should remove the Hijab, but I refused. He threatened to take me to a village where nobody will set his eyes on me. So I became scared of him, therefore I refused to follow him.

That is it.
Did the emir intervene?
The emir gave him one week to come back, but he came back even before it reached one week. He said he must take me home. He will not take me to our house, but he'll take me to somewhere that nobody will set his eyes on me. I quickly ran back to the emir and to the Shari'a Court for protection. I don't want to go back to my father, because he is threatening me.

How did you come to know about the Shari'a Court?
I found out from people. I went to them on my own to formally lodge my complaint.

Why Shari'a Court?
They have to protect me. You know when you take a case to court over life threatening issue, the court must protect you. That is it.

Did your father come back after you refused to follow him?

He came back. He kept on coming back. The other time he even threatened to bring some people to kidnap me.

Is it true that at a time your father came with the Christian Association of Nigeria (CAN) officials to you?

Yes. Is it true that you also went to the Jama'atul Nasril Islam (JNI)?

Yes.
Why did you go to JNI?
I told you and I'll still repeat it, though I don't want to repeat my words again. I want them to intervene on my behalf, the threat is too much. Now I can't go anywhere, I cannot even continue with my schooling. I cannot do anything because of the way he has been threatening me. He is still bringing people up till now to keep watch on me.

How do you know that your father has assigned people to keep watch on you?

There was a time that I wanted to go out, information came to me that my father was around and I had to stay back since I don't want him to take me away. I know that if I gout anytime,I he'll pick me up.

How did you come to know about JNI?
I have been reading about them. That is why I went to them.

How did you present your case to JNI?
I wrote to them seeking for their intervention, because I do not know how to go about convincing my father. I also learnt that the emir wanted to hand me over to my father, because the burden of my case is becoming too much for him to bear.

If your father should promise to allow you to practice your new faith, will you go with him? I'll not. In a family that you are the only Muslim, how can you practice in that house?

You know when he (my father) came along with my mother the other time, his actions and the harsh words he used, even if I go back home, my life will not be secured in his hand. That is why I said I'll not go.

Did you start learning anything about Islam?
Yes, I started learning how to perform ablution. I have learnt how to recite Surah Al-Fatihah, I am now in my second surah.

Do you pray five times a day?
Yes I do. I am even fasting now. I have been fasting since the beginning of the month of Ramadan.

What is your massage to people wanting to join Islam?

I have only one massage. Islam is good. Muslims are truthful, everything they say, they believe in God and they carry people along. Once a person converted to Islam, he'll be carried along until he is strong to stand on his own.

What is your appeal to your parent?
I am appealing to my parents not to be angry with me. My conversion to Islam will not separate us. I still love them, even though I am here. They can come and visit me and I can also visit them. They shouldn't think my new faith will take away the love I have for them. It will not. I am very sorry