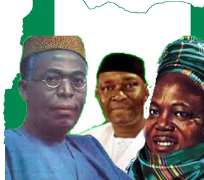 The balkanization of Nigeria and many other colonial African countries is an idea whose time has come. Some individuals and groups who are living in the emotional world of nostalgia may cry, as much as they want to, over a past that has dealt so badly with the so-called Nigerians and Africans. (It does not matter how anyone feels about the inevitableness of Nigeria’s demise but the truth is that every ethnic people that have participated in the Nigerian project have been losers for it. So, it is in the interest of all that Nigeria disintegrates as quickly as possible).

The crying of some is understandable but should not prevent the necessary and curative knives of the progressive and pragmatic social surgeons, whose eyes should be on the long term benefits (for all) of cutting, dissecting and dismembering this cancerous cadaver (Nigeria) today. The saying goes that the wailing mourner will not stop crying as long as they continue to look on the face of the corpse as it is lying in state. One Nigeria as a problem is an issue of life and death and all honest and practical thinkers must put emotions aside if they ever hope to solve the problem.

Just as the hood does not make the monk, as they say, the big sizes of societies or countries do not make them into great and powerful cultural, economic or successful entities. For all honest and sincere critics it does not require much convincing to acknowledge that in practical terms, bigness or great sizes do not automatically bestow power or greatness on anything or anybody. Had that been the case then whales in the oceans and elephants in the jungles should be more powerful and greater than human beings, but it is not so. Human beings in spite of their puny and inconsequential physical sizes in comparison with these massive fleshly behemoths are still the most powerful and the greatest in all creation. Humans are superior to all the other animals because they have better developed brains rather than gigantic intimidating bully-like physical structures. Does the delusional moniker of “the giant of Africa” and “Africa’s most populous country” sound familiar here?

If sizes of countries were important as some people claim about retaining one Nigeria then the extinct dinosaurs would still be alive today. The dinosaurs had the opportunity of millions of years to master and control their world and should have prevented the asteroids that struck the Earth and wiped them out some 250 million years ago. Only the other night in July 2013 an asteroid flew by the Earth and already human beings have got the capacity to predict and prevent a really destructive one from striking the Earth.

In my opinion such abilities are real power and greatness and not monstrous mounds of thousands of pounds of flesh and cartilages where you will need several thousands of pounds of food every day to merely feed and keep them alive. Such monstrosities and bigness, just for the sake of it, creates slothfulness, sluggishness and lack of creativity. Practically, the entire time is spent foraging for food merely to keep the size alive and no time is left for creative or progressive achievements. Such atrocious bigness cannot produce great arts or conscious and deliberate beauty. Efforts being expended merely to maintain and feed the sacrilegious and outsized bigness of a united Nigeria are simply scandalous and should no longer be sustained. Those things that feed the monstrous black hole that is one Nigeria are nepotism, impunity, corruption, religious/ethnic intolerance, so-called rotational leadership – mediocrity in place of merit, etc. Nigeria’s continued existence as a united country can only breed terrorism, genocides, death and destruction, poverty, bad governance, lack of leadership and direction, lack of progress and arrested development.

The significance and value of all societies or countries can only be measured in the security and wellbeing of the inhabitants. In other words every society or country can only be considered valuable and viable to the extent it is able to preserve and serve the needs of the people in it. Therefore, so long as a society or country is incapable of carrying out this primary duty to its citizens, it does not matter the wealth or other material infrastructure within its boundaries, it ceases to be legitimate and cannot rightly or legally require allegiance from the people. The Nigerian state does not deserve nor can it legitimately demand the allegiance of any of its citizens, especially that of Igbo people and the other Southsouth people. The reason is because the Nigerian state and its other citizens unjustifiably visited on the Igbo and the other Southsouth people the crime of genocide where more than 3.1 million of them perished between 1966 and 1970. (This heinous crime of ethnic/religious cleansing and genocide on Igbo people is still ongoing in Nigeria today).

Igbo people, Southsouthners and other sections of the Nigerian country that have been so mistreated should exercise their right to opt out of the union as quickly as they can. In some quarters today you hear people say things like; Nigerians should try as much as possible to avoid another Biafra-Nigeria war. As 2015 is coming nearer you also hear people saying that Nigerians should not allow the prediction that Nigeria will disintegrate in 2015 to come to pass. The prediction was made by a Washington, DC based private research organization in 2005. Rather than waste time and energy on trying to prevent the occurrence of an inevitable but eventually beneficial event, the people should rather direct such energy to thinking on how to run successfully the new smaller and more realistic countries that will emerge from a disintegrated Nigeria.

No person or group stops fighting a war for liberation until they win that war. South Sudan demonstrated this truth in 2011. The South made war with the Arab North starting from 1956 to 2011 when they won their freedom and independence. It is slave mentality and cowardice that tells Igbo and other Biafrans that they should try by all means to avoid another war with Nigeria while agitating for freedom. Igbo and all Biafrans should start preparing for a final showdown on the battlefield with Nigeria for their freedom. Let Nigeria burn. Let Nigeria die. Let Nigeria disintegrate, that is the just and fitting fate of a genocidal state.