CONSTITUTIONALITY OF YOUTH PARTICIPATION IN POLITICS 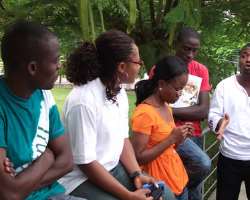 For nearly two years that the current President and Commander-in-chief of the Nigerian Armed Forces Dr. Good luck Jonathan has presided over, a major landmark of his administration has been the appointment of very young persons in very sensitive positions of public trust at the national level. It is clear that the current administration is well aware that engaging the Nigerian younger persons with the requisite skills and technical acumen was one of the fastest way of growing the economy of Nigeria and repositioning Nigeria to assume the rare position as one of the nations in the third World that is willing to witness swift transition from the current less than impressive global position to the lofty position as a developed economy.

Globally, most developing economies have already accepted the practice of appointing or electing younger citizens into sensitive political positions as a given which is why a young upwardly mobile community development worker and junior Senator in the person of Barack Obama was elected January 20th 2009 as the first black President of the United States of America [at age 48] and that is precisely why in places such as Australia [Julia Gillard] and the United Kingdom [David Cameron] were elected at one time or the other as Prime Minister of their respective nations.

In our reflection today we will look at the constitutionality of youth engagement actively in the politics of Nigeria. Youth means young people, both male and female, considered as a group. It is the period of life when one is young. Youth can be best be described as a period of transition from dependence of childhood to adulthood’s independence as members of a community.

The word 'Youth' is considered in certain arguable quarters as fluid in terminology, it is not fixed to any age group psychologically because most people still active in their respective fields of human endeavors still view themselves in that pejorative term as belonging to the youthful age grade. Certainly, youth is universally defined for persons within specific age grade.

However, age is an essential determining factor to a youth. The United Nations for statistical consistency across regions, defines, “Youth” as those persons between the ages of 15 and 24 years, without prejudice to other definitions by member states.

The African Youth charter defines “Youth” as every person between the ages of 15 and 35. In this write up, the definition of Youth given by the African youth charter will serve as a guide.

The constitution of every country stipulates a certain age its citizen/citizens are to attain before he aspires for any political position in the country.

In Nigeria, for example the Electoral Act stipulates that the voting age in Nigeria is eighteen (18) years and above. The 1999 constitution of the Federal Republic of Nigeria as amended makes provisions for various elective positions and the ages the candidates for such positions are to attain to qualify for such positions.

The youths are given ample opportunity by the Constitution of the Federal Republic of Nigeria to participate fully in the Nigerian politics. Section 65(1) (a) provides: “That a person shall be qualified for Elections to the senate if he attains the age of thirty-five years (35).”

Subsection (B) of the same section says:-“the minimum age to be a member of the House of Representatives is thirty years (30)”.

Based on the constitutional provisions enumerated above, the constitution carries the youth along in the politics of the country The Youths who attained the age of 18 years are allowed to vote for any candidate of their choice.

Moreover, the youths who have attained 30 years of age can contest to be House of Assembly member and Federal House of Representatives member.

Also youths who have attained the age of 35 years can contest to be senators and Governors of various states.

In the Local Government level, the councillorship and chairmanship positions are opened to youth to participate vigorously without hindrance.

Based on the definition of youth by the African Youth Charter fixing the age group between 15-35 years, the Youths in Nigeria are constitutionally “empowered” to participate in politics.

In conclusion, the youths are constitutionally empowered to participate in politics especially the Executive and Legislative arms of Government.

In the context of the 2015 election that we are preparing for, the Nigerian youth are well advised to key in into the active politics of their respective communities and states even as they ought to join the political party of their choice through which they can contest for any elective positions of authority in the 2015 elections and they ought to develop workable blueprints on changing the face f politics n Nigeria from what we know as politics of looting of public fund to politics of development and human capital development.