Rivers Political Crisis Not A Threat To Nigeria's Democracy - Presidency 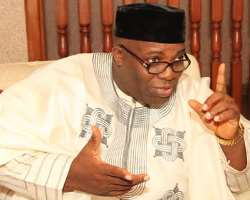 DR. DOYIN OKUPE, SSA TO THE PRESIDENT
Listen to article

SAN FRANCISCO, July 24, (THEWILL) – The Presidency on Wednesday said the political crisis in Rivers State does not pose a threat to the nation’s democracy insisting that Nigeria’s “democracy remains robust, alive and well.”

The Presidency’s position on the Rivers State crisis is however contrary to the position held by various influential stakeholders including civil rights groups and activists, labour unions, students organisations, the NBA and a wide segment of the press, amongst others.

Addressing a press conference in Abuja, Doyin Okupe, a special adviser to the president on public affairs, likened the Rivers crisis to the political chaos in Ogun State in 2010 when warring factions in the state assembly attempted impeachment and counter impeachment proceedings forcing the police to lock up the assembly for several months.

Recent developments in the state clearly show that opponents of the Rivers State Governor, Rotimi Chibuike Amaechi have been making it difficult for him to effectively govern with the tacit approval of President Goodluck Jonathan and his wife Patience.

An unsuccessful attempt to oust the speaker of the house of assembly, a strong ally of the governor, spiraled into a dangerous fracas that left at least one legislator with life threatening wounds.

The full transcript of Okupe’s briefing is reproduced below:

“We are compelled to react to the unfolding political drama emanating from recent activities of some Governors from the northern part concerning political developments in Rivers State. These political moves, which are clearly intended to create fear, despair and sense of apprehension among the citizenry are grossly unfounded, misplaced and a deliberate over sensationalization of the situation. â€¨We therefore wish to state as follows:

Insinuations and statements suggesting that Rivers State is on fire are grossly unfounded. So far, as is it evident to every discerning observer of political developments, the state is calm and peaceful. Residents of the state continue to go about their various businesses, religious, social and political activities under peaceful atmosphere. A key pointer to the prevailing peace in the state is the fact that Governor Amaechi, the Chief executive and Chief security Officer of the state, felt confident enough to travel to the United Kingdom on official assignment. It is doubtful he would have had the luxury of leaving the country if his state is in turmoil as is being canvassed.

The situation in Rivers State is purely a localized political matter and has no dangerous or far reaching consequences for the peace and security of the nation. Since our return to democratic rule in 1999, It is on record that not less than twelve states have witnessed incidents of attempted impeachment of Speakers of Houses of Assembly in Nigeria and none has posed any threat to peace and security in the country even when our democracy was not this established.

Developments in Rivers State do not pose any threat to our democracy. Our democracy remains robust, alive and well. In politics as in every sphere of human activity, different shades of opinion on issues are not uncommon within the polity but often get resolved either politically or through legal channels. It is therefore disingenuous for anyone to suggest that the political disagreement in Rivers State would imperil and ultimately derail our democracy. We recall that in Ogun State in 2010 after series of sustained fracas and attempts at impeachment and counter impeachment, the Inspector General of Police locked up the House of Assembly for several months. In all that time, nobody in the whole country suggested that the situation was a threat to our nascent democracy, and no state Governor went on any solidarity visit.

Nigeria is not in any way in disarray. As is the case in every country of the world, there may be conflicts of ideas and interests here and there, which in itself is the beauty of democracy and should not by any means be construed to mean that there is chaos in the country or that Nigeria is tilting towards anarchy as some people have claimed. Nigeria remains peaceful and is not and cannot in any way be threatened by political developments in Rivers State. It is clear that one of the most potent threats to our corporate existence and sovereignty since independence has been the Boko Haram insurgency. This menace has been confronted frontally with strong determination and focus, which has led to decisive action that has brought about the containment of the menace by the Nigerian military and other security agencies. Most reasonable Nigerians would have expected these governors to be deeply concerned and appreciative of the laudable effort of the Federal Government, which has brought reprieve from fear as well as comfort and solace not only to the people of the affected areas but also to the entire nation and international community. Surprisingly, they appear to be more interested in political maneuvering and grandstanding at the expense of the well-being of the people in their states and the stability of the nation at large.

The Nigerian Governors Forum (NGF) issue like the political development in Rivers State remains essentially an affair of the 36 state governors. The outcome of elections in the body is inconsequential to the orderly governance of the Nigerian state by the Presidency. The choice of who becomes leader of the body clearly has no significant ramification on the wider political calculation of who becomes President of the country as events in our recent history bear out. We note that the chairman of the NGF in 2011 was clearly at odds with the President. He contested and lost the party’s presidential primaries to the incumbent President of the country who went ahead to be elected President by the overwhelming majority of Nigeria. It is clear therefore that occupying the chairmanship of the NGF does not in any way confer any political influence or advantage as regards who becomes President of the country neither will it be of any major political significance in the 2015 Presidential race as is being bandied about erroneously.

We therefore admonish Governors having serious issues with their party to take advantage of various channels within the party machinery to resolve it. Also, they may first of all try to show good example of their commitment to peace by working to put their own house in order through restoration of peace and consensus within the NGF. While we note their current political moves, they should be mindful that in all they do as political leaders, they ought to put the interest of the nation and our democracy first. This indeed, is the hallmark of true patriotism.

We note with satisfaction and appreciation, the subsequent visit by five governors and two deputy governors including Governor Fayemi, Governor Fashola, Governor Aregbesola, Governor Ajimobi and Governor Amosun, who demonstrated high and commendable sense of patriotism and genuine concern for the nation, with very conciliatory disposition and statesmanlike advise to Governor Amaechi towards finding a lasting solution to the political disagreements between the governor and members of the state’s House of Assembly.

We want to assure Nigerians that the Presidency is not involved in the dispute in Rivers State and will not deliberately engage in any act of destabilization of Rivers State or any state in the country neither is it interested for whatever reason, in destabilization of the NGF. In consonance with the dictates and practice of true federalism and the supremacy of the rule of law, it will be advisable that whatever political entanglements may still exist in Rivers State should be resolved politically or by employing due process of law, in the interest of peaceful co-existence and overall well-being of its citizens.”