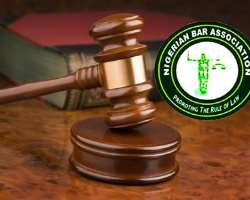 SAN FRANCISCO, July 24, (THEWILL) – Former President of the Nigerian Bar Association (NBA), Chief Thompson J. Okpoko (SAN), has raised the alarm over what he alleged as the 'cash for certificate' scam going on at the Nigerian Law School.

Speaking on the level of corruption in the country at the just concluded Law Week organised by the Warri Branch of the Nigerian Bar Association (NBA) in Warri, the Delta State capital, Okpoko lamented the dwindling standard of the legal profession in the country, blaming it on alleged award of degrees to the highest bidder in the Nigerian Law Schools. "One of the worrisome problems in our society is corruption; it has permeated every aspect of our lives, corruption is now in the Law School where it costs a Law student N750,000:00; N500,000:00 and N250,000:00 to obtain a first class, second class upper and second class lower degrees respectively while other lesser ones(degrees) range between N100,000:00 to N150,000:00,” he alleged. The former NBA chief also lamented that the law profession is operating in a society riddled with corruption as he charged the political class not to tempt the judiciary.

According to Okpoko, corruption in the larger society has permeated into the Law Schools, where, he alleged, degrees are now for sale.

He however said even where some judges are said to be corrupt as affirmed by both the past and present Chief Justice of Nigeria (CJN), it was not proper to say “every Judge is corrupt nor no Judge is corrupt.”

Okpoko therefore urged members of the public to jettison such perception as he declared that any Judge found compromising should be reported to the appropriate authority for adjudication. While calling for the reformation of the National Judicial Council (NJC) to flush out the ‘bad eggs in the judicial system’, Okpoko said corruption which has solidified in the Nigerian soil, originated from the British colonial masters.

He therefore charged the Federal Government to address the issue so as to ensure that an independent, truthful and faultless judiciary thrive.

He also charged NJC to build and give a befitting house to every CJN on their retirement.

Also speaking at the occasion, a senior lawyer, Augustine Alegeh (SAN), said despite the many challenges facing the judiciary in the country over the years, the Judiciary has made profound decisions and handled down salutary and commendable judgments which have laid the basis or foundation for a strong, virile and united Nigeria.

Justice Olabode Adegbehingbe of the Ondo State High Court, in his paper, entitled “The legality and Desirability of Plea Bargain in Nigeria,” said there can only be a great judiciary and judicial process when the country prepares itself for one.

Dr. A.O. Giwa in his paper titled; "Plea Bargaining", stated that Nigeria is not ripe for plea bargaining because there is no legal or institutional frameworks in the country’s jurisprudence for an articulate, uniform, purposeful and just administration of the concept.

Welcoming participants to the three-day event, the Chairman, NBA Warri branch, Ben Oji, said the Law Week was an opportunity to beam searchlight on the judiciary to evaluate its growth and performance.

This, he said, is important now as Nigeria is on the eve of its centenary celebration.