OAU Students Take To The Streets Of Osogbo 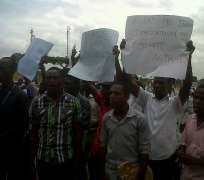 It's no news that the issue of the strike embarked upon by ASUU has been a topic of national debate. Parents, students, progressive minded individuals all over the country have have been called on the Federal Government to concede to ASUU's demands so that tertiary education in the country can be re-positioned, however till this moment, even as the strike lingers for over two weeks, there has been no positive response or development from the Federal Government.

It was in the light of these development that on the 22nd of July,2013, students of the Obafemi Awolowo University Ile-Ife stormed Osogbo the capital of Osun state and staged a peaceful protest march round the streets and to the State Secreteriat where they expressed

their grievances on a great deal of issues bordering from the Federal Government's insincerity in implementing the 2009 agreement reached with ASUU, government's poor funding of tertiary institutions, the rot and decay in the nation's institutions of learning, and to drive home the point that the Federal Government should quickly concede to ASUU's demand so that they can go back to school.

The students also protested the appointment of Professor Wale Omole a former Vice Chancellor of the institution from 1991-1999, under whose administration five students were brutally hacked to death by cultists allegedly sponsored by him.

They carried placards all over the streets of Osogbo the state capital carrying slogans such as "STOP SUFFOCATING EDUCATION","WE DEMAND 26% BUDGETRY ALLOCATION TO EDUCATION", "WE DEMAND THE IMMEDIATE RE-TRAIL OF PROF. WALE OMOLE", "NO TO INCESSANT STRIKE ACTIONS, and many more.

The protesting students decried government's insensitivity to their basic rights which is education, its nonchalant attitude and its lukewarm stance at addressing education issues, especially at the tertiary level, which is currently witnessing a great deal of rot and decay. They sang and chanted songs majorly against the Jonathan administration under whose dispensation Nigeria is currently facing rot and deterioration in all ramifications.

They called on the GEJ administration to immediately settle the lingering crisis with ASUU by conceding to all their demands, so that students can return to their institutions of learning. It must be noted that since 2009, the Federal Government has not implemented the agreement reached with ASUU.

and moral standards; reasons why the country's institutions of learning churns out half-baked graduates year-in-year-out.

The protesting students also carried leaflets and flyers written in Yoruba and English containing the demands of ASUU. This they distributed to motorists and people around the streets of Osogbo.

The protesting students also challenged Prof. Rukayattu Rufai's (Minister of Education) qualifications as a professor, someone who has been in the education line for long, and yet she couldn't find a way to address the issues bordering on education in the nation's higher institutions.

They expressed their displeasure at her attitude towards the issue of the strike, and called on her to resign if she is not capable of the office, for under her, there has been no improvement in teaching and learning conditions in the nation's tertiary institutions. Rather than progress, it has been a case of increased deterioration.

The protesting students called at the Osun state Secreteriat of the National Union of Campus Journalists (NUJ) where they dropped a communique and were addressed by one Timothy Agbor a correspondent with Premier Newspaper who talked on the support of NUJ to the strike action embarked upon by ASUU and promised that as journalists, they will always support students and ASUU in their struggles, for education is an issue of national interest and concerns all.

At the State Secretariat, security personnel manning the gates fearing that the protest might get out of control, locked up the gates, but the protesting students conducted themselves peacefully, and called on the security operatives to allow them access to the Secretariat Complex to relay their grievances to the state governor, but the students were prevented from entering by men of the Police Force manning the gates.

The Students called on the governor to come out and address them, and expressed their bitterness over the present state of decay in the education sector. Men of the Police Force tried to dismiss the students by lying to them that the governor was not on seat. There were also many conflicting reports as to the whereabouts of the governor.

O.A Kayode, Assistant Commissioner of Police in charge of Operations Osun state, addressed the students and lied to them that the governor was not on seat, probably to dismiss them, but the adamant students stood their grounds that they would not leave the state secretariat complex except the State governor or any high ranking member of his cabinet came out to address them. They began to chant and sing songs of ALUTA outside the gates.

Their adamant stance brought Gbenga Akanwu, the Assistant Chief of Staff to the State Governor who addressed the students and promised that the governor will address them shortly, and true to his words, the state governor appeared minutes later and listened to the students as they expressed their grievances.

The spokesman of the protesting students Oluwole Olubanji (A.K.A Engels), a student of philosophy addressed the governor and called on him as a progressive who has always been on the forefront of the struggle towards better living conditions in the country to support their cause and relay their grievances to the Federal Government.

Engel's also expressed the displeasure of student's towards the deterioration of education in the country, and described Aregbesola as one of those who was in the forefront of struggle over the Structural Adjustment Programme (SAP) in the 80's when he was a student at the Polythecnic Ibadan, yet decades after, the country is still being plagued with the same problems.

Engels also expressed the displeasure of the students over how O.A. Kayode lied to them that he was not on seat, saying that if policemen lie like that, how can they be trusted.

The governor who listened keenly addressed the students after the address by Engels and commended them for staging a peaceful protest, collected the communiqué and the placards and promised he will get back to them shortly. With that, the students happily returned to the OAU campus.