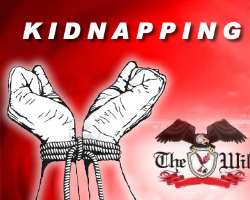 A British national has been kidnapped by gunmen shortly after landing at the international airport in Lagos, Nigeria's largest city, a diplomat and a private security source told AFP Friday.

"There was a kidnapping of a Briton and we are working with the Nigerian authorities," said Wale Adebayo, spokesman at the Deputy High Commission in Lagos.

He declined to provide any details, including the day the attack occurred.

A private security source familiar with incident however told AFP that the British man was abducted on Tuesday while travelling into the city after landing at the airport.

The attackers opened fire on the vehicle and "the driver was injured by a gunshot," before the Briton was seized, added the source, who requested anonymity.

He said there were strong indications that the gunmen were seeking a ransom payment.

There is typically heavy traffic well into the night on most roads leading from the airport in the Ikeja neighbourhood towards central Lagos.

It was not clear where the attack occurred, or whether there were witnesses nearby.

The kidnapping of foreigners for ransom is common in Nigeria, particularly around the oil-rich southern coast, and there has also been a rise in such incidents in Lagos.

In March a British man working for the French energy company CGG was kidnapped in the upscale Victoria Island area of the city.

He was released days later, with officials refusing to confirm reports that a ransom had been paid.

In the oil-producing Niger Delta region, foreigners working in the oil sector are often released following an armed abduction. Their employers and officials typically do not reveal details about ransoms.

Foreigners have also been kidnapped in the north, but those attacks are considered different and have been blamed on Islamist extremists.

A Briton was among seven foreigners kidnapped in February from a construction site in the northern Bauchi state in an attack claimed by the Islamist group Ansaru.

Ansaru later posted a video on YouTube that appeared to show the corpses of some of the hostages.

In 2010, 28-year-old Briton Chris McManus was abducted along with an Italian national, Franco Lamolinara, in the northern Kebbi state.

They were both killed in the northwestern Sokoto state nearly a year later, amid a rescue operation jointly planned by British and Nigerian authorities and authorised by British Prime Minister David Cameron.

That attack was later also blamed on Ansaru, a group which is seen as an offshoot of Boko Haram, the Islamist insurgents who have also targeted foreigners.