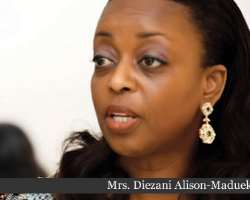 
The Minister of Petroleum Resources, Mrs. Diezani Alison-Madueke, has urged stakeholders in the Oil and Gas Industry not to politize or personalize the Petroleum Industry Bill currently before the National Assembly, stressing that the bill is geared towards providing a win-win scenario for all stakeholders in the petroleum sector.

Mrs. Alison-Madueke made this submission Thursday at the National Assembly during the two-day public hearing by the Senate Joint Committee on the PIB in Abuja.

The Minister averred that the responsibility for the exercise of the powers proposed in the Bill for the President and Petroleum Minister will ultimately rest on any administration in power at the time and so should not be personalized.

She argued that it was important for the law to sufficiently empower any administration to act in the best interest of the Nigerian people, stressing that the provision empowering the President and the Minister of Petroleum Resources is not about her or the President as it is not likely that the present administration will be in power when the law gets to full implementation in the years ahead.

'By the time the PIB is fully articulated and implemented the current President and Minister of Petroleum Resources will no longer be in office.

This Bill takes a while before it is operational. She stressed that the proposed transition period after the passage of the Bill is at least three years. Note, there are over 80 regulations to be made for this Bill to be operational,' Mrs. Alison-Madueke stated.

According to her, whilst we take best practices from other developed regions, we should also work within the understanding of our own socio-economic and social-cultural norms, and create entities and policies that will work and are not destined to fail from the word-go.

She further stated that contrary to the impression that the PIB granted enormous powers to the Minister of Petroleum Resources, it should however be noted that the powers vested on the Minister by the Bill are not different from those vested on the Minister's counterparts by the petroleum laws of the United kingdom, Malaysia and Norway, stressing that the powers granted the Nigerian Minister by the PIB is less than those of her counterparts in the laws of advanced petroleum producing countries.

Mrs. Alison-Madueke noted that the PIB establishes a flexible fiscal regime that will increase government take and yet encourage investment in the petroleum sector saying it allows for production-based incentive system which in the long run will accommodate every player in the industry.

Addressing the concern on the multi-faceted regulatory bodies for the PIB, the Minister said this is basically as a result of the complex nature of the industry adding that an unwieldy, mammoth entity that hosts two complete separately run organizations is not a mode of efficiency but the disaggregated regulatory system would enable speedy response to variety of issues that may arise from time to time.

On the issue of the Host Communities, the Minister noted that it was established to mitigate the human and environmental conditions in the region and to assuage the feelings of the host communities towards oil and gas companies.

Declaring open the public hearing, the Senate President David Mark said the National Assembly was anxious to pass the PIB and urged all the stakeholders to make objective submissions that would create a win-win situation for the Federal Government, the International Oil Companies and other operators in the petroleum industry.

It would be recalled that the PIB was based on the report of the Oil and Gas Reform Implementation Committee (OGIC) set up by the Federal Government thirteen years ago to carry out a comprehensive reform of the oil industry.