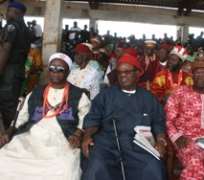 * Presents 250 security Vehicles and cheques worth over 250 Million Naira to Anambra Communities.

Gov. Peter Obi yesterday opened a new vista in the fight against crime in Anambra State by presenting 250 Patrol vehicles fitted with sophisticated security gadgets to the 177 communities in Anambra State, markets and registered vigilance groups in Anambra State. The ceremony, which was graced by head of security agencies, traditional rulers, presidents-general, market leaders, Government officials and other stakeholders in the State took place at the Ekwueme Square, Awka. While each community received 1 vehicle each, others received more than one depending on their number and population.

Speaking during the presentation, the Governor said that the vehicles for each town would be restricted to the community specifically for security purposes. He warned against use of the vehicles to provide escort to politicians and other non-security related activities.

The Governor also presented cheques worth over 250 Million Naira to all the towns in the State, no town received less than 1.3 Million Naira, to pay 10 vigilante people per town and for fueling of the vehicles for a year. He said some towns would receive more because they would have more than 10 vigilante people depending on their population and size.

Recalling that the presentation was not the first time the State was procuring vehicles for security, he said that his Government had purchased over 300 vehicles for security agencies in the State as well as assisted them in various ways, including building roads in barracks for the single reason that though federal organizations, that they work for the good of the people of the State. "When we assist Federal organizations in the State and partner with Churches and organizations working in Anambra and for the people of the State, I do so because they work for the benefit of Anambra people. Like the churches, I work with them because with lesser money, they achieve more than we do using regular contractors. I understand contractors are not happy with this, but let them realize that we are doing what will be ultimately more beneficial to the people," Obi said.

Speaking further, he called on the people of the State to intensify prayers to God for them to elect somebody better than himself so that the revolution in the state would be sustained, for the State not to go back to her inglorious past on account of bad leadership.

The Governor said that the decision to buy the vehicles from INNOSON Motor Manufacturing was to encourage local industries for the expansion of the industrial base of the State. He said that the new set of his official vehicles had been ordered from INNOSON, as well as 500 buses for all the schools in the State by the end of the year.

In his vote of thanks, the Chairman of Traditional Rulers Council, Alfred Achebe said that Obi was a blessing to Anambra State. He commended his development of all sectors of the State and described as "unprecedented", the measures, projects and things he is doing in Anambra State and for the people of the State. He frowned at the Governor's announcement of his retirement from politics, insisting that people like him are needed in the Nigeria today.

In his own remarks, a member of Anambra State House of Assembly, Hon. Nikky Ugochukwu said that the Anambra State House like other Anambra people are pleased with the development in the State under the Governor and with the cooperation of the House. She said they would continue to support him as Lind as he continued to work for the people.

A community leader in the State, Chief Anthony Oguejiofor describe what was happening in Anambra as " overwhelming," he said it was instructive that the vehicles were all procured from INNOSON Motor Manufacturing Company and appealed to those in authority to patronize local industries as Governor Obi is doing