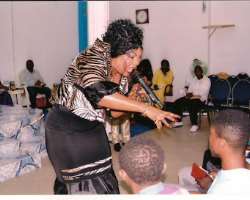 'Do not judge men of God' is the usual shield most so called men of God in Nigeria hide under to do many things, but I ask myself these questions, 'who are now the 'children of the Devil'?' Or do we say if you are not ordained as a pastor or the likes, you are a 'child of God'? Should only the ordained workers of God be called 'men' while the followers be 'children'?

In that case, what happens to the Bible passage, 1 Peter 2:9 that says as a believer of God and Jesus Christ, 'you are a chosen generation, a royal priesthood, a holy nation, His own special people, that you may proclaim the praises of Him who called you out of darkness into His marvelous light?' Let us not be deceived, we are all men of God.

When Jesus Christ was ascending, he commanded us all to 'go into the world and preach the gospel'. With that, we are all workers in the vineyard.

Truly, I don't expect pastors to be perfect beings, but just like celebs, they are expected to live exemplary lives because they are models. The Bible even said if your deeds will lead someone astray, then amend your ways so that his blood won't be on your head.

I watch in surprise how our former Nollywood 'bad girl' still make do with heavy makeup after becoming an Evangelist. Before she was ordained, she was criticised for her 'too much makeup' style. Her dress style too was under attack, but thank God for a change in that area.
Sincerely, the makeup issue should give her an idea that as an Evangelist, she has to drop that behaviour so as to make people see her as a serious Evangelist. 2 Cor 5:17 says 'if any man be in Christ, he is a new creature: old things are passed away; behold, all things are become new,' so, there is every justification for Eucharia to change those things that brought harsh criticism to her when she was in the 'world' as we say in Christiandom.

If you think this is a personal vendetta on her, I will say you are dead wrong because as a stakeholder in the vineyard of God, I should correct a sister so that she doesn't make people perish because of her outlook.

Her last pictures of her ministration in Senegal are nothing to write home about. I looked at the photographs and I asked myself if Eucharia is truly an Evangelist or not. With those long fingernails, eyelashes, make-ups and others, I wondered how the anointing flowed. I asked, 'how would someone be saved by someone appearing like this? Christianity is about modesty, not flashing of things.

'When I was a child, I spoke as a child, I understood as a child, I thought as a child: but when I became a man, I put away childish things,' Paul the Apostle said in 1Cor 13:11. Do we say Evangelist Eucharia Anunobi is still a child?