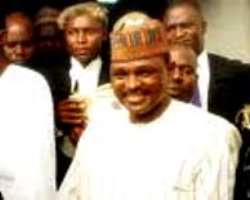 
The Court of Appeal sitting in Lagos today discharged and acquitted Chief Security Officer (CSO) to the late Head of State, General Sani Abacha, Hamza Al-Mustapha, from the murder of Kudirat Abiola.

A Lagos High Court had sentenced Al-Mustapha to death by hanging for the murder of Kuditat, wife of the acclaimed winner of the June 12, 1993 presidential election, MKO Abiola.

The presiding judge chided the lower court for seeking “to secure a conviction by all means.'
Sources told Pointblanknews that the Lagos State government might head for the Supreme Court.
ing the accused person, the trial court held that the defence had proved its case beyond reasonable doubt.