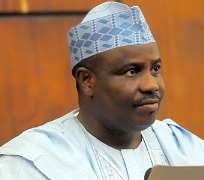 Recently, the Speaker of House of Representatives, Hon Aminu Tambuwal raised dust when he said that conditions for revolution are ripe in the country. Hon Aminu Tambuwal is no stranger to controversy. In his public posturing, the Speaker continually wants to be on the populist side. This could be due to process that led to his emergence as the Speaker of House of Representatives. His emergence was as a result of the marriage of the opposition members and some rebel PDP members in the House. It is normal therefore, that he should be singing tunes that will be pleasant to the ears of the opposition.

At an event in Lagos, the speaker decried the high rate of corruption and other vices in the country. To him, we could be having revolution in our hands if our leaders (looters) do not have a change of heart. Hear him: “The most compelling reasons for revolution throughout the ages were injustice, crushing poverty, marginalisation, rampant corruption, lawlessness, joblessness, and general disaffection with the ruling elite. You will agree with me that these describe conditions in our nation now, to a very large degree.”

He spoke the right words, at the right place, the right audience and the right time. His analysis was on the mark. Unemployment is at its highest peak. Insecurity is on the rise. Unbridled corruption is the order of the day. Poverty has enveloped the land. Election rigging is the modus operandi of winning election by the ruling party. Economic growth has taken flight. Nothing is working. The country is almost a failed state. No thanks to the political elite.

What has the honourable speaker and the House done to stem the tide? It can safely be said that the National Assembly is part of our problems. They allocate salaries and allowances to themselves that no one knows except them. They embark on frivolous trips and over sight functions whose results are never known. In a country where majority can barely find food to eat, the honourable members are allocating to themselves several millions of naira for their furniture, wardrobe, cars and other unnecessary luxuries. They live in affluence while other Nigerians are scavenging for their survival. The electorate who voted these men and women into the House only knows the colour of poverty.

The Speaker and members of the House are not different from the political elite. Rather than making sure that the executive arm is checkmated and made to execute programmes beneficial to the people, they are busy hobnobbing with the executive to the detriment of the people. Scandals in the House are no longer news. Most reports never see the light of day. Important bills are swept under the carpet. How can it be said that the House chaired by the Honourable Speaker has been unable to pass the Petroleum Industry Bill (PIB) years after it has been sent to the House? This is a bill meant to arrest the monumental rot in the petroleum sector.

There is anger in the land. Anywhere one goes, anger is written all over the faces of Nigerians. Anger of man’s inhumanity to man! The people we elected or who rigged themselves to power are now masters and lording it over the masses. No political elite thinks of developing the nation and bringing it at par to the west.

Infrastructural decay decorates the land. Arewa youths are crying over the wasted opportunities by their leaders. In every geo political zone there are cries and anger against the ruling class.

Gradually, the people are increasingly becoming aware that the problem of this country is neither religion nor ethnicity. The use of religion and ethnicity to balkanize the people can no longer work. The realization has dawned on the masses that the problem of this country is the political elite. It transcends religion, ethnicity and geo political zone. The hunted are getting united by the day to seek for the hunter. The oppressed are in unison to seek for the pharaoh that refuses to allow them go.

Let the Honourable Speaker not delude himself into thinking that the revolution that he says is ripe will pass him by. He is part of the ruling class. Even if he sings beautiful melodies to the people, he will still be remembered as part of the problem. The only way to save himself is to purge himself and work arduously to transform this country to the nation of our dreams. Let other members of the political elite shun corruption and other vices and remember that power was entrusted to them by the people. They are not masters but servants of the people.

Let our leaders learn from what happened and is happening in the Arab world. If the Arab spring, happens in Nigeria, the political elite will be consumed in the flames of people’s anger. Let them including Hon Aminu Tambuwal do what is right, implement people oriented programmes and return looted money (for those who might have corruptly enriched themselves) to the people. That is the only way to prevent the revolution which the Honourable Speaker is predicting.