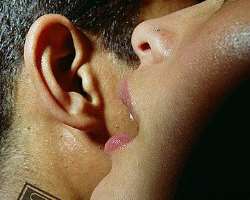 Monumental sex scandals constantly litter the door steps of the rich and famous. And the latest one that has continued to confound all those who have heard about it involves a former bank MD and the delectable wife of an ex-soccer star. The erstwhile bank boss who is still on trial for allegedly helping himself with some of his customers' money and the one-time mesmerizing footballer's wife, incidentally, are both from the Igbo-speaking part of Delta State. Although the footballer's wife is from another South East which name begins with the first alphabet.

Their illicit romance is now so pronounced that in their circle of friends it has continued to top the agenda. Greed and avarice, lack of sexual fulfillment and sheer madness are some of the reasons given for the beautiful mother of two's ignoble action. And for the disgraced bank MD, it is just to demystify a soccer star who is adulated, celebrated and revered.

The footballer and his wife live on the mainland while the bank MD lives on the Island. To confuse many, they usually check into hotels separately. They also sneak into other coded abodes for their love trysts. And sometimes travel abroad to satisfy their lustful desires. Their secret shame however came to the fore recently when someone close to one of them squealed. Now, the woman's husband is aware. Likewise the cheating man's wife.

The latter, a no-nonsense woman, has vowed to show the footballer's wife 'pepper'. And with all she's been spewing since she got hint of her husband's infidelity, the woman may be in 'pepper soup' very soon.

Incessantly accused of cheating on her husband, the footballer's wife was at a time romantically linked with a successful but humble crooner who got married recently in Dubai and also a newspaper publisher who owns a very, very colourful paper. The 14th alphabet begins the woman's first name and the 15th her husband's.

For the adulterous banker, the 6th and the 1st begin his name and surname respectively. Dark skinned and K-legged, before he ran his bank aground, he had too many crazy ideas, and one of them was that one day automobiles will operate on water. This, of course, never materialized before he was booted out in shame and opprobrium.