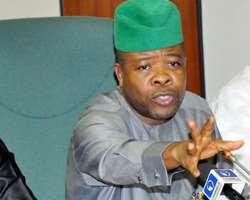 DEPUTY SPEAKER OF THE HOUSE OF REPRESENTATIVES, HON. EMEKA IHEDIOHA
Listen to article

ABUJA, July 08, (THEWILL) - Deputy Speaker of the House of Representatives and Chairman of the Ad-hoc Committee on the Review of the 1999 Constitution, Hon. Emeka Ihedioha, has explained why the report of his committee did not adopt state police, single tenure and immunity for the President, Vice President, Governors and Deputy Governors as canvassed by some commentators and critics.

He said the submission of his committee on those and every other issue on the constitution review was a clear reflection of the views and position of the broad generality of Nigerians as reflected and documented in the results of the peoples’ public sessions conducted by the House of Representatives last November.

Explaining the process adopted by his committee in arriving at its report, the Deputy Speaker stressed that it was all-inclusive, thorough and painstaking: “As has been clarified on many occasions, the work of the Committee was designed in such a manner that it relied on the input of Nigerians to arrive at its decisions. And the Civil Society Organisations have continued to play major roles in all the stages of the process so far.

“The House Ad-Hoc Committee on Constitution Review conducted a painstaking consultative process with major stakeholders as joint-organisers. These stakeholders include the Nigerian Labour Congress (NLC), Trade Union Congress (TUC), Nigerian Union of Journalists(NUJ), Nigerian Union of Teachers (NUT), Civil Society Organisations (NSO’s), Nigerian Union of Local Government Employees (NULGE), National Council of Women Societies (NCWS), Youth and Students organisations, Nigerian Bar Association (NBA) etc. The results (of the peoples’ public sessions) were collated publicly with all the stakeholders present. The results have been presented and published for people to dispute and correct. In the absence of any convincing reason to the contrary, we stand by these results.

According to Ihedioha, although many “celebrated pundits and constitutional lawyers have repeatedly canvassed that Local Government should squarely be a State responsibility,” further questions put forward to determine the views of the public on this issue proved the outspoken elite wrong.

On the second question on whether the Constitution should be amended so that the process to create Local Government Areas now rest exclusively with the States, such that States assume responsibility for the funding of Local Governments, he said the people voted overwhelmingly to reject this proposal by 276 federal constituencies to 78 while six absented .

He also disclosed that the question of defined tenure for Local Government Chairmen/Councilors in the Constitution received an almost unanimous answer in agreement as 331 Federal Constituencies, voted ‘Yes’, while 26 Constituencies only voted No with three absenting.

The Deputy Speaker said such resounding views of the people could not have been tampered with by his committee, stating: “We have no choice but to reflect the manifest wishes and mandate of Nigerians on these issues. No doubt, beneficiaries of the current system may think otherwise. As a matter of fact Local Government autonomy may be decidedly against federalist principles. But Nigerians have chosen the

type of federalism they want, guided by their experiences. It is for Nigerians to defend their choice and make sure their voices count. We have done our duty.”

“Once again, we did our duty. If the Senate or the House of Representatives or State Houses of Assembly reject this clear decision of the people, so be it. It is again for Nigerians to hold those it elected accountable,” he said.

To a further question: “Should Nigeria have one police organisation which shall be constituted in such manner as to give State Governors control over the Commissioner of Police in their respective States?,” he disclosed that the answer was a resounding ‘No’ by 237 Federal constituencies, while 53 said ‘Yes’, with 70 absenting.

According to him, Nigerians voted overwhelmingly to retain the current police structure and system as in the Constitution by 292 to 62 Federal Constituencies with six absenting. “As a result of this vote, the Committee did not recommend the establishment of State Police,” he said.

“With this level of unanimity, it was not difficult for the Committee to adopt the current four- year renewable tenure and to reject the single term proposal of either five, six or seven years. This is the clear position of Nigerians on this issue,” he stressed.

On other issues that some commentators have considered controversial, the deputy speaker said “the result of the Peoples Public Sessions showed that Nigeria preferred the Presidential system rather than Parliamentary system by 326 to 29 with five absenting.

Nigerians also rejected “Resource Control” by 236 to 123 votes with five absenting and rejected increase of derivation component of Revenue Allocation Formula to 20 percent by 224 votes to 125 votes and 11 absenting.

“Nigerians also rejected the rotation of the office of the President between the North and South and among the six geo-political zones by an overwhelming majority. They preferred the use of merit. It was also surprising that Nigerians did not support the removal of certain items from the Exclusive List to the Concurrent List. They also rejected inclusion of the six geo-political zones in the Constitution and to make them tiers of government by an overwhelming 330 to 27 votes with three absenting.

“Nigerians supported the creation of a role for traditional rulers in the Council of State and a role for them at the state level. And so the Committee made recommendations to accommodate them,” he said.

Justifying the position of its report further, Ihedioha said: “As a representative institution, the House of Representatives made an effort to give pride of place to the views, wishes and aspirations of its constituents - the Nigerian people in this Constitution review exercise. We don't represent ourselves and so even though we may not like a particular issue, it would be an assault on democratic principles if we deliberately disregard the clear expressed wishes of the people signified in what could be referred to as a quasi-referendum.

“It is very convenient for people to sit in the comfort of their offices or to stay in townships like Abuja or Lagos and pontificate on what Nigerians want on a particular issue. I will recommend the results of the People's Public Sessions to all the pundits, commentators and indeed all the federalists in our midst. The result is a sound and almost unanimous rejection of some of the ideas marketed in the media as a given on many issues. It shows that Nigerians have their own ideas on how they should be governed. It reflected the interpretation of peoples experiences at the local level. The people did not agree with the very loud views of their political leaders on many issues.”