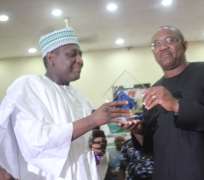 Anambra State governor, Mr Peter Obi, yesterday bagged the best performing governor on the eradication of polio in the southeast from Bill Gates and Melinda Foundation at a massively attended ceremony at the Women's Development Centre in Awka.

Speaking while presenting the award to Gov Obi which went with a cash prize of N120 million, the minister of state for health, Dr Mohammad Bate said the award was not by chance as Gov Obi had distinguished himself in the health sector which he observed had resulted in the provision of ambulances to hospitals, accreditation of schools of midwifery and the wonderful partnership with the Church and described the Anambra example as a total package, noting that the state had remained polio free in the past five years.

Responding Gov Obi thanked the minister for coming to the state to present the award on behalf of Bill Gates and Melinda Foundation and noted with satisfaction that it was not one of the awards anyone could suspect as having been bought and said the state government would match the N120m it received with another N180m which would be ploughed into the building of ten more health centres in the state.

Recalling some of his strides in the health sector, the governor cited the state's first teaching hospital as an example.

In a similar development the governor has splashed N60m on the second and final batch of 5000 youths under the Anambra State Youth Empowerment Programme (ANSYREP). While handing over the cheques of N100, 000 to each of the successful candidates, Gov Obi charged them to use their money judiciously in order to justify the state government's faith in them, even as he charged them to shun thuggery in the forth coming elections in the state.

He expressed satisfaction with the fruitful results already being yielded by the programme and restated his government's readiness to continue to support the youths.

In his speech the coordinator of the programme, Dr Okey Ikechukwu, commended the governor for accepting to support the programme and disclosed that the governor did not submit any list of candidates to them but had told them to ensure the programme worked. He noted with satisfaction that many of the beneficiaries had made a success of the money and training given to them.

A member of the state legislature Hon Nikky Ugochukwu, congratulated the governor on his award and said it was expected, given his unprecedented achievements in office and also commended him for his youth friendly disposition. Gov. Peter Obi (right), receiving the Bill and Melinda Gates Award for the best State in the Eradication of Polio in the South-East from the Minister of State for Health, Dr. Mohammed Ali Pate (left) at the Women Development Centre, Awka, yesterday