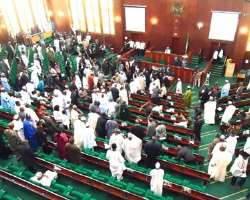 ABUJA, July 03, (THEWILL) - Just smarting from a hot debate on the contentious State of the Nation Address Bill, two senators; Kabir Garba Marafa (ANPP, Zamfara) and Senator Paulinus Igwe (PDP,Ebonyi) nearly engaged themselves in free for all on Wednesday but for the timely intervention of Senator Ahmed Lawan and some other senators.

It was the first time in many years that such open confrontation between two senators would happen under the leadership of Senate President David Mark.

The altercation was first thought to be a fall out from the explosive debate on the State of the Nation Bill, which was sent back to the Senate by President Goodluck Jonathan with objections last week.

However, it later emerged that the reason for the brawl was a disagreement over the Zamfara State plans to procure firearms for the state vigilante groups.

Clarifying the issue at the end of plenary, Senator Enyinnaya Abaribe,Chairman Senate committee on information, Media and Public Affairs, said the fracas between the two senators has nothing to do with the debate on the State of the Nation Bill but was on a coming motion to be moved on Thursday by Senator Basheer Garba Mohammed(PDP, Kano).

The motion, he disclosed, is on the arming of vigilante groups in Zamfara State by the State Government to combat the recent surge in armed banditry, robbery and other violent attacks in the state.

Senator Marafa who is from Zamfara, according to Abaribe, was complaining that Senator Mohammed ought not to have sponsored a motion on any issue that has to do with Zamfara since he is not from Zamfara.

Senator Marafa, he continued , was of the view that the armed robbery attack was becoming too hard for the people and as such the Police have authorised the state to procure arms for the vigilante groups to combat the menace.

"In the process, Senator Igwe who is the Chairman, Senate Committee on Police Affairs, chipped in and faulted Marafa, saying the Police could not have given such authorisation to procure arms for such unknown groups in law.

"That resulted in the fracas. So it has nothing to do with the debate on state of the nation", he said.

Earlier, Senate President, David Mark, in trying to douse the tension cautioned the warring senators , saying "as democrats, the Senators should resolve issues by talking and not by boxing."

Mark said "As democrats, we should resolve all the problems by talking and not by boxing. In any case for the first time in 14 years, I have seen an effort by people to put out boxing gloves,its never necessary,we must never do that,we are distinguish senators and elder statesmen.

"We can do all the talking but we should never resort to boxing. I want to appeal once more to suspend the debate on this( State of the Nation Address Bill) for today,if nothing else but because of the ways tempers has risen.

It would be recalled that the Senate passed the state of the Nation Bill and sent it to the President for his assent but the president sent back the letter to the Senate, saying some aspects were in conflict with some sections of the 1999 Constitution as amended.

But majority of the Senators objected on the premise that once a Bill is passed into law,the President can either assent or not assent to the Bill and not send it back to the Senate for ammendment as the Senate is the highest law making organ in the country as stated in the constitution.

Senator Ita Enang(PDP, Akwa Ibom) debated extensively on the subject and declared that President Jonathan has no constitutional right to send back a bill for ammendment.

Senator Enang drew reference from the Constitution,the Senate Rule book and said only the Supreme Court has the right to clarify the issue to the Senate if the President can send back a Bill to the Upper House if passed.

The debate was therefore deferred to pave room for further consultation.