Theophilus Ilevbare: What does Rev. Jesse Jackson want from Nigeria? 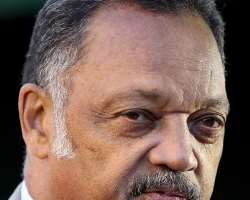 On Democracy Day, Rev. Jesse Jackson joined the Jonathan government in towing the infamous path of ignominy as he danced to the macabre steps of the Jonathan adminstration's mid-term scorecard of transformation Agenda. Jackson said it was obvious that the ship of the Nigerian Nation is sailing in the right course describing the transparency of President Goodluck Jonathan as unequalled in contemporary democracy. My first thoughts were to let it pass, but in the course of my interaction with concerned Nigerians in the diaspora, particularly in the US, we saw a need to bring to public knowledge Rev. Jesse Jackson's clandestine scheme of grand deception his visits and long association with the country's leaders has been shrouded.

Over the past two years, the present administration has resorted to window dressing and the former shadow Senator for the District of Columbia has being the trumpeter on the international scene. The Baptist minister, tried to pull the wool over the eyes of Nigerians during the mid-term performance report of President Jonathan. The sight of Rev. Jackson on that day was reminiscent of former President of the United States, Nick Carter, working in the same capacity for ex-President Olusegun Obasanjo. Jackson's affiliation with the present administration can at best be described as a relationship of congruent characters.

When in America, he challenges the US government to be inclusive, to establish just and humane priorities for the benefit of all. Across the Atlantic to Africa, he endorses corruption, unemployment and undemocratic proclivities of an elected president. His speech had nothing to suggest that he is an advocate of economic and social justice, but instead, it smacked of the familiar vibes of a political hireling.

As a civil right activist, his activism must be people centred. Any government that has failed in its responsibility in providing basic infrastructure, employment, security of lives and property is not deserving of such high praise. The rhetoric of President Jonathan and his fawning ministers does not translate to realities on ground when citizens are inundated daily with unprecedented corruption, rising unemployment, deteriotating security conditions, decaying infrastructure and impunity, brandishing useless figures in the faces of Nigerians that translates to nothing makes a mockery our democracy. Rev. Jackson, as an international activist, ought to have known better that nowhere in the world is achievement on paper equated to hard facts on ground more so when Nigerian politics and politicians are involved. The scorecard of a Nigerian President must be scrutinized before making pronouncement on it.

In Bayelsa state, the two-time United States democratic presidential nominee backed the federal government's amnesty programme for Boko Haram. Consequently, he was lampooned by Nigerians for supporting the misguided and unfortunate amnesty offer. I will begin to take Rev. Jackson more seriously if he voices same sentiments to President Obama that al-Qaeda, AQIM and other members of dreaded terrorist cells on US soil be granted amnesty. He cannot feign ignorance of the stance of America on terrorism. The United States do not negotiate with terrorists let alone grant amnesty. Rev. Jackson should be in a better position to advise and campaign against amnesty. There is no justice in rewarding terrorists who have turned places of peaceful gatherings to an abattoir, law abiding citizens are preys as they have continued to perpetrate their dastardly killings with unrestrained fervor. The Boston Marathon bombing in which not more than five people were killed resulted in a manhunt for the perpetrators, putting Boston in locked down until the suspects were apprehended. But for whatever be the reason the government brought Jackson to Nigeria, it is clear it was for name recognition rather than substance of thought or theory. Jackson must strive to understand the peculiarities and complexity of issues in Nigeria before making his comments.

Can the American political activist aver that his several visits to Nigeria spanning decades reflect the ideals of his Rainbow PUSH coalition in the US where good governance is put on the front burner? His long years of friendship with some of Nigeria's tyrannical military rulers has been fraught with umbrageous intents. Snippets revealed he once told a group of African diplomats in New York City in 1997, that Sani Abacha was the visionary leader Nigeria needs "at this(sic) moment," same Abacha whose regime was widely considered as an international pariah. Of Ibrahim Babangida in 1992, he said he is "The most progressive military president Nigeria deserve". These were military dictators who have been accused of murder, embezzlement, institutionalizing corruption, men who have done everything in their reach while in power to put Nigeria out and send Nigerians to hell on earth. Rev. Jackson fought hard in the international community against economic sanctions on Nigeria when the UN was suggesting such a move in 1996 to speed up democratic changes and return the country to civilian control. It is same Jackson, who didn't see anything wrong fraternising with a dreaded dictator that is enjoying a democratic Nigeria today. If Dr. Martin Luther King Jr. was alive, certainly, he would have disapproved of Jackson's ties with the discredited soldiers of fortune and his eccentric international activism. Reason why Jesse Jackson has lost relevance in his country cannot be farfetched.

The image of a prosperous and corruption-free Nigeria is being painted by a motley figure like Rev. Jesse Jackson to the world and Nigeria stand to lose a lot if we allow him get away with such.

Since the inception of President Barack Obama led administration in 2008, Rev. Jackson - the Greenville, South Carolina born advocate - has made spirited attempts to launder the image of Nigeria to America that it is deserving of a visit by President Obama. But he has been unsuccessful in his latest mug's game. On Obama's second trip to Africa, he has once again boycotted Nigeria, choosing rather to stopover at countries who have demonstrated commitment to democracy, good governance and has upheld human rights. Expectedly, President Obama does not acknowledge him as a serious politician. He is no longer considered an elder statesman in the US. So, Nigeria and other third world countries is the way to go. If the intentions of Rev. Jackson were genuine, why has he failed to work with other Nigerian activists in Nigeria or US over the years?

Jackson's visits to Nigeria underscores the thinking of some “friends” of Nigeria in America who find it difficult to disconnect from the wealth they see in the Nigerian political elite. For them, that only is important. They care less about the intricacies and the dynamics of control of its resources. They see Nigeria and all they want is to be part of the few who milk the country dry.

Well, to the Jackson crowd, we have a duty to remind them that the struggle for civil rights, democracy and good governance by Nigeria's activists of yesteryears and today is not in vain.