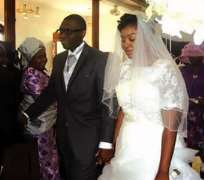 
John Kumuyi, one of the sons of the General Superintendent of the Deeper Christian Life Ministry, and his now-wife, Love, were suspended by the leadership of the aforementioned church and banned from carrying out any activity in this church. The decision is grounded by the recent controversy over the couple’s wedding in Jamaica.

It would be recalled that John and Love wedded in Jamaica on 15 June, 2013, only to receive thousands negative comments from members of the church. Many condemned the wedding gown worn by the wife-to be, also other aspects of the wedding that were at variance with the church’s standards.

Love’s attires turned out to differ from the conventional ones set for Deeper Life members. Lots of people noticed her hair wasn’t “natural” and that she applied lipstick as part of the make-up.

A limousine hired to deliver the couple to their destination after the wedding, a huge cake that was served at the ceremony were contrary to the church’s tradition.

The church leaders decided to place the couple on suspension to give them time to pray and seek forgiveness from God for their action, following countless comments on social media and by the members of Deeper Life.

The news was delivered by Pastor Philip Oluwi, a key leader in the church, who obviously was following the instructions from the General Superintendent of the church, Pastor William Kumuyi. Oluwi stressed that the standard of Deeper Life regarding wedding and moderacy had not changed.

“Hence, deviation warrants the displeasure and frown of God and the leadership of the church. John and Love are now under discipline,” Oluwi announced to the entire congregation.

The couple has already apologised to the church for the inappropriate way the wedding was conducted. The letter was read by Oluwi and re-read several times to church members by the Church’s Secretary, Pastor Jerry Asemota. The letter, addressed to the Church Secretary and titled ‘Letter of Apology,’ expressed the deepest regret of the couple for bringing the church into disrepute.

The wedding was taken to another church where the ministers in the unnamed church conducted the wedding and joined them in holy matrimony.

Deeper Life leaders that came from Nigeria were said to have disapproved of the earlier gown Love was to wear for the wedding, while another was hurriedly sewed the night before the wedding.

Church leaders were said not to have seen the new dress until the couple was marching into the church and by then, it was too late to take any action as the wedding was not conducted in a Deeper Life church