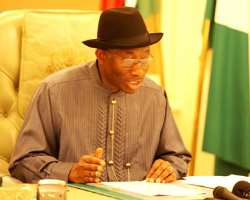 SAN FRANCISCO, July 01, (THEWILL) – With the security situation in the country top on the card of his administration, President Goodluck Jonathan, Monday, held another meeting with top security chiefs at the Presidential Villa.

The meeting was the second of such in two weeks; apparently to review the emergency rule declared in the three North-eastern States of Adamawa, Borno and Yobe to tackle the Boko Haram insurgency.

Though all the security chiefs would not entertain any question from anxious journalists at the end of the meeting, many believed that the Boko Haram insurgency and the vexed issue of oil theft in the country were discussed at the meeting.

Only last week, President Jonathan met with stakeholders in the oil industry along with State Governors and Security Chiefs to discuss the issue of oil theft which is already becoming a source of concern to all, especially its effects on federal revenue.

The same matter was also on top of the agenda at the National Economic Council (NEC) meeting last Thursday during which a Committee was inaugurated to come out with ways of tackling it.

Expected to report back to NEC at its next meeting on Thursday, the Committee has the Delta State governor, Emmanuel Uduaghan as Chairman while other members include Governors Seriake Dickson (Bayelsa), Rotimi Amechi ( Rivers); Liyel Imoke (Cross River); Godswill Akpabio ( Akwa Ibom); Adams Oshiomhole (Edo) and Olusegun Mimiko (Ondo).