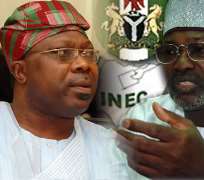 Advising INEC to follow the path of law and natural justice rather than compromising so openly, Omisore said the truth is that INEC applied for a stay of execution and this appeal is still pending in the Appeal Court. “There has been no ruling on the appeal and the matter which was to come up on the 28th of this month was adjourned sine dine due to elevation of Justice Kudirat Kekere-ekun as a Supreme Court Justice,” he added.

Omisore, in recent media interviews, had alleged that Jega had failed to carry out a court order that Ambassador Akeju be removed as the Osun State REC.

But in a letter sent to the Editor of Nigerian Tribune by the Chief Press Secretary to INEC Chairman, Kayode Robert Idowu, on Friday, the electoral body said there was no subsisting court order against Ambassador Akeju as Osun State REC.

The INEC letter had read: “Permit me to respond to a repeated claim by notable politician, Senator Iyiola Omisore, that the Chairman of the Independent National Electoral Commission (INEC), Professor Attahiru Jega, is in defiance of a court order removing Ambassador Rufus Akeju as the Resident Electoral Commissioner (REC) for Osun State.

“The politician restated this allegation in an interview published on pages 39 & 40 of your newspaper on Thursday, June 27, 2013. In that interview, he claimed, as in previous ones (for instance, in Sunday Vanguard on April 28, 2013), that a court has restrained INEC from recognising Mr. Akeju as REC, but that the Chairman persists in defiance of that order by failing to remove the REC.

“Ordinarily INEC, as a neutral umpire, would not want to take issue with political partisans of whatever inclination. But because the Commission’s silence may be mistaken by the unwary public as a proof of veracity of Senator Omisore’s claim, it has become imperative to make clear that there is no subsisting court order against Ambassador Akeju as Osun State REC.

“True, in a ruling on 23rd March, 2011 by the Federal High Court in Oshogbo, Hon. Justice Babs Kuewumi gave an interlocutory order of injunction restraining INEC from recognising the REC pending the hearing and determination of the Originating Summons in the suit. But the Commission’s lawyers lodged an appeal and filed a Motion for stay of execution of the interlocutory order. This appeal is still pending before the Court of Appeal in Akure.

“Let me reaffirm that INEC is a law-abiding organisation and does not defy valid court orders. The Commission is guided by provisions of the Law and strives to do the right thing always. Politicians, and indeed all Nigerians, are urged to be likewise disposed – for the good health of our democracy.”

But Omisore, in a statement signed on Saturday by the Media Adviser of his Campaign Organisation, Mr. Victor Oriola, said the appeal does not in any way vacate the court order on INEC over the Osun REC matter.

Omisore’s statement reads: “The attention of Iyiola Omisore Campaign Organisation has been drawn to a statement from the Independent National Electoral Commission (INEC) denying the existence of a subsisting court order stopping the commission from recognising the Resident Electoral Commissioner (REC) for Osun State, Mr Oluwatoyin Akeju, as REC and barring the said REC from presiding over 2011 General elections in the state.

“The commission`s statement was a direct response to calls by Senator Iyiola Omisore for the re-organisation of INEC leadership in Osun State in the interest of natural justice and in obedience to a court order. Our first feeling is that it is either Prof Jega is not properly briefed by the Commission`s legal department or there is a grand conspiracy by the commission’s leadership to subvert the will of the people in previous and forthcoming polls in Osun State. If none of the above applies, we are left to wonder why the commission’s leadership will justify its disobedience of a court order on the ground that it has appealed the ruling.

“We thus need to state from the onset that INEC lied by denying existence of a subsisting court order. It again lied by not admitting that its appeal against the order is still pending. It is trite fact in law that an appeal does not and cannot constitute vacation of a validly issued order. As at today, there is no appeal ruling that has vacated the interlocutory injunction issued by Justice Babs Kuewumi of the Federal High Court Osogbo on February 28th,2011.

“Justice Kuewumi had ruled on the motion on notice in suit FHC/os/cs/26/2011 that ``an interlocutory order of injunction is hereby made restraining the INEC from recognising Mr Akeju as the Resident Electoral Commissioner for Osun State pending the hearing and determination of the originating summons; and that ``an order is also made restraining Mr Akeju from conducting or supervising the conduct of elections as Resident Electoral Commissioner in Osun State``

“The judge also proceeded to specifically noted that ``INEC is by this order directed to as a matter of urgent national interest to make immediate arrangements to ensure that the pending elections are not negatively affected by this development`` , meaning a direct order for the replacement of Akeju before the pending elections of 2011.

“We repeat that INEC lied by claiming that Justice Keuwumi had ordered a stay of proceeding or a vacation of the above order. The truth is that INEC applied for a stay of execution and this appeal is still pending in the Appeal Court. There has been no ruling on the appeal and the matter which was to come up on the 28th of this month was adjourned sine dine due to elevation of Justice Kudirat Kekere-ekun as a Supreme Court Justice.

“Facts INEC is running away from are as follows:

*That it disobeyed a validly made court order by recognising and allowing Mr. Akeju to supervise the 2011 general elections in Osun State;

*That while INEC lodged its appeal before the election, it failed to secure a stay of execution of the order. Appeal in law does not constitute a stay; and

“If INEC is truly law abiding as its statement claimed, why was it difficult for the commission to simply effect change of posting for the Osun REC before the election? If the commission is an impartial umpire as it claimed, why was the REC allowed to supervise and rig the 2011 election against a subsisting court order which the commission has failed to vacate? If there was no grand design against PDP in Osun State, what is INEC interest in appealing ruling which if obeyed would have confirmed the fairness and integrity of the commission?

“By admitting to have appealed against a court order stopping a card carrying member of the Action Congress of Nigeria from presiding over elections in Osun State, INEC has unwittingly confirmed its compromised status as far as Osun State is concerned. It is our solemn conviction that INEC has now openly expose its partisanship and conspiracy against the PDP by defending an ACN member serving as REC even when a court of law ruled against such action.

“It is equally worrisome that Prof Jega and other commissioners are watching as the commission not only disobeyed the 2011 court order but is also proceeding to allow the same Akeju to conduct the 2014 governorship election. Mr. Akeju was a card carrying member of ACN and a former top aide of the ACN National Leader. Is INEC not worried about having a biased umpire in a turbulent election year? Why is the commission deliberately aligning with those trying to subvert the will of Osun people?

“We are putting it to INEC that rather than compromising so openly, the path of law and natural justice should be followed. Akeju as REC in Osun is an affront on equity and justice as well as a threat to the conduct of acceptable, free and fair elections in Osun State. Mr Akeju should and can no longer be allowed to be a referee in a match involving his boss and others.”