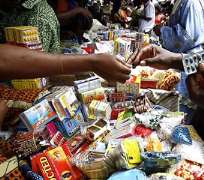 For someone with advanced technical know-how and a devious mind, a piece of chalk or some flour or starch can be shaped into a tablet or pill. With the naked eye, it’s almost impossible to tell it’s a copycat. The global counterfeit drug trade, a billion-dollar industry, is thriving in Africa. The markets are flooded with fake and poor-quality drugs, making a trip to the pharmacy seem like a game of Russian roulette. If you pick the wrong box, it could literally mean your death.

About 100,000 deaths a year in Africa are linked to the counterfeit drug trade, according to the World Health Organization (WHO). The agency defines counterfeit medicine as “one which is deliberately and fraudulently mislabelled with respect to identity and/or source.” Both branded and generic products are faked. In some parts of Africa, Asia and Latin America, more than 30% of the medicines on sale can be fake, notes the organization.

The detection of fakes has become more difficult over the years, notes a 2012 study published by the Lancet, because of “counterfeiters’ increased ability to reproduce holograms and other sophisticated printing techniques.” Some even add active ingredients that pass quality test controls but don’t provide any benefit to the user.

Roger Bate, an economist specialising in international health policies, believes that substandard drugs—the result of poor manufacturing or “deliberate corner-cutting”—are a much bigger health problem than fake medicines. “Off-the-shelf drugs made by Chinese and to a lesser extent, Indian manufacturers tend to perform inconsistently on quality tests,” he claims in an article for the US-based think tank American Enterprise Institute (AEI).

Crime against humanity
The proliferation of fake, falsified and substandard drugs has had tragic consequences. “Counterfeiting is more than a criminal act,” writes Professor Pierre Ambroise-Thomas, the WHO expert on malaria and tropical parasitic diseases, in the Mediterranean Journal of Haematology and Infectious Diseases. “Manslaughter is perfectly justified to describe such an act although some prefer calling it simply murder.”

Unfortunately, the penalties for the crime are not strong enough to deter criminals, lead researchers Gaurvika Nayyar and Joel Breman emphasize in a June 2012 report on poor-quality drugs published in the Lancet Infectious Diseases. They strongly advocate that the “production and distribution of counterfeit anti-malarial drugs should be prosecuted as crimes against humanity.”

Weak regulations and drug licensing
A major sweep across 16 seaports on the east and west coasts of Africa last July allowed the World Customs Organization, an intergovernmental organization that advises customs administrations worldwide, to seize more than 82 million doses of illicit medicines estimated to be worth over $40 million. The fake drugs found during the raid included cough syrup, anti-parasitic and anti-malarial drugs, antibiotics and even contraceptives.

To fast-track registration, the WHO encourages national regulatory authorities to choose medicines from its list of pre-qualified products. But it’s up to the individual countries to decide to register a product or not.

Seloi Mogatle, Botswana’s principal pharmacist in drugs registration told the WHO she appreciates “the opportunity to use the agency’s work without losing national autonomy.”

High drug prices
Another major weakness of the regulatory agencies is their inability to close what Olike Chinwendu, in her thesis, “The Fight Against Fake Drugs by NAFDAC in Nigeria,” calls the “chaotic drug market.” This includes unlicensed drug vendors—most of them street, kiosk or open-market vendors.

Instead of “seizing, destroying and penalizing violators,” Chinwendu suggests strategies used by Tanzania and Ghana to train, license and regulate illegal drug vendors.

A joint study by the WHO and Health Action International found that “duties, taxes, mark-ups, distribution costs and dispensing fees regularly constitute between 30% to 40% of retail prices, but occasionally up to 80% or more of the total.”

SMS-protected drugs
While educating consumers has been crucial in fighting counterfeit medicines, regional coordination has also been effective. In West Africa, health and law enforcement officials, together with the WHO and Interpol, have been running multi-country operations aimed at disrupting transnational fake drugs criminal networks. Their latest operation in 2011, called Cobra, resulted in the seizure of 170 tonnes of counterfeit and illicit medical products.

China, a global manufacturer of generic drugs and the maker of the award-winning anti-malarial drug, artemisinin, has also joined the fight. According to the Xinhua News Agency, China is installing “recognition and tracing technology on its drugs,” and anti-counterfeit labels are sealed on each drug package. Chinese pharmaceutical companies are also strengthening cooperation with African governments and drug distributors to trace imported drugs.

New technology is also revolutionizing the fight against counterfeits in Africa. TruScan is a handheld spectrometer being used at airports and border posts to analyze the chemical composition of drugs, helping to spot “bad drugs” in seconds.

In addition, simple and free text messages are being used to check the authenticity of drugs. Start-ups like mPedigree Network and Sproxil have designed systems that allow legitimate drug manufacturers to label their packages with an encrypted code. Consumers simply scratch off the label on the package and text the code for free to the company that maintains the system. The response, sent by text, is instant, informing the consumer whether the drug is real.

Countries like Ghana, Nigeria and Kenya have integrated mobile telephony–based consumer verification into their safety regulations. The system is also being replicated in Asia. The brilliance of the service is that it allows consumers to protect themselves, giving them the power. But more importantly, the low-tech innovation is helping restore the public’s trust in the health sector.