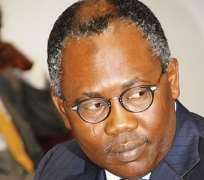 SAN FRANCISCO, June 27, (THEWILL) – The Federal Government on Thursday said it recovered the sum of £22.5million confiscated from one Raj Arjandes, an alleged Indian associate of the late General Sani Abacha, by the Royal Court of Jersey in 2011.

It also disclosed that plan to retrieve the €175 million recently seized from the Abacha family by the Principality of Liechtenstein was ongoing.

The Minister of Justice and Attorney General of the Federation (AGF), Mohammed Adoke (SAN), who disclosed these while giving the three-year performance report of the Federal Ministry of Justice and its agencies at the ongoing Ministerial Platform in Abuja, also said his Ministry saved the Federal Government about N672.6 billion in court damages and judgment debts between 2011 and 2013.

He explained that his ministry saved the country N13,360,783,169.39 from its intervention in judgment debt owed by the Federal Government and its agencies arising from 89 cases.

He cited the case of a suit filed at the ECOWAS Court (suit No. ECW/CCJ/APP/08/09) by the Registered Trustees of the Socio Economic Rights and Accountability Project (SERAP) where his ministry saved for the country, $1million that would have been paid in damages.

He also said that his ministry saved N501,278,765,770 from the suit filed at the ECOWAS Court against the government by the Incorporated Trustees of Miyetti Allah KautalHore Socio-Cultural Association (ECW/CCJ/APP/03/11).

The AGF said within the three years, his ministry handled 783 cases (civil and criminal), while it handled 75 terrorism related cases, adding that the reform efforts of his ministry resulted in the enactment of new laws and the drafting of Bills aimed at enhancing justice delivery and crimes prosecution in the country.

He listed such laws to include the Terrorism (Prevention) Act which has provided ample weapon for the prosecution of terrorists and on which the government relied in proscribing Boko Haram and other groups.

He also disclosed that the National Drug Law Enforcement Agency (NDLEA) seized a total of 607,104.27kg of illicit drugs (comprising cocaine, heroin, cannabis sativa, psychotropic substances and methamphetamines) within the period while the Legal Aid Council (LAC) completed 5974 cases (both criminal and civil) within the period.

According to Adoke, the National Copyright Commission (NCC) seized a total of 4,561,813 valued at N4.8billion within the period even as he disclosed that the agency's effort has resulted in "drastic reduction in the level of piracy, about 50 per cent increase in the profit margin of certain genuine investors in the copyright-based industries, creation of employment and boost in tax earning of government from the industry practitioners."