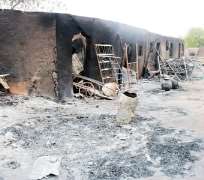 ABUJA, June 26, (THEWILL) - The Senate on Wednesday said the allegation of killings and destruction of properties in the border town of Baga in Borno State was grossly exaggerated.

The senators also urged President Goodluck Jonathan to, as a matter of urgency, direct the Armed Forces and security services, especially the Army, to carry out recruitment of soldiers and officers to increase the size of the country's forces.

They declared that the Boko Haram insurgency in many parts of the North has overstretched the Services.

The Senate resolution was sequel to a 24-page Senate Panel report on the April shoot-out between the Multi-National Joint Task Force (MNJTF) and Boko Haram extremists in the remote town of Baga, Borno State, near the border with Chad.

The report was adopted at plenary on Wednesday.
The report noted that the quantum of destruction of houses, vehicles and motorbikes in Baga were exaggerated.

"There was actual physical count of 115 houses burnt as against the figure of 2,000 houses given by the Governor (Borno State Governor, Kashim Shettima) and 3,059 houses by the district head," the report stated.

Again, the report stated that the death toll of 185 was also inflated but there may not be more than 37 deaths. The report insisted that there is no documentary evidence from either the natives or the military to ascertain the figures quoted.

"Although the National Emergency Management Agency (NEMA) in company of some community youths counted 32 graves seven days after the incident, yet it is difficult to ascertain the actual number of casualties," the report which was presented by the Joint Committee on Defence and Army, Police Affairs and National Security and Intelligence, stated.

The Senate President, David Mark, spoke in the same vein. He called on the President Jonathan administration to tackle issues of extreme poverty in the north and ensure effective policing of Nigeria's borders to check the insurgency.

"Once there is a crisis, there will be a security side and the community side and if there is compensation, people will exaggerate the figure of people that died. There is no way people will die in a community and they will not know the number of deaths. The governor of Borno said there is abject poverty in the state and I think the immediate solution to the crisis is border control, reduction in poverty and unemployment," Mark stated.

The report identified the elusive Boko Haram sect leader, Abubakar Shekau, as a Kanuri man from Niger Republic. It added that although the Boko Haram sect members have some Chadians and Cameroonians within their midst, about 80 per cent of them are of Kanuri tribe.

The MNJTF, it could be recalled, was established in Baga in 1998, consisting of Forces from Nigeria (1,200), Chad (700) and Niger (200) to curb excesses of rebels and other undesirable elements within the Lake Chad region. In June 2012, MNJTF's mandate was expanded to include fighting terrorism in their area of operational responsibility.

According to the report, on March 29, an Army officer named Lt. Zira was brought out from a bus through personal identification at 10:20 hours and killed by armed bandits suspected to be Boko Haram members. His body was mutilated.

Again, on April 16, MNJTF patrol team was attacked at 19:30 hours in Gajagaja area in Baga and a soldier shot in the head eventually died in the clinic.

According to the report, when asked how he was able to identify the Boko Haram dead members from the civilians, the MNJTF commander said Boko Haram members were identified with weapons and charms on their bodies.