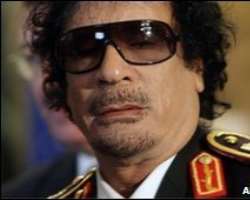 Muammar Gaddafi has reportedly been blacklisted by Switzerland
Listen to article

Libya's Muammar Gaddafi has called for a jihad, or holy war, against Switzerland, as an ongoing diplomatic row between the two nations heats up.

He criticised a recent Swiss vote against the building of minarets and said Muslims must boycott the country.

There have been tensions between the nations since 2008, when one of Mr Gaddafi's sons was arrested in Geneva, accused of assaulting two servants.

A Swiss foreign ministry spokesman declined to comment on the jihad call.

The Libyan leader made his comments while speaking at a meeting to mark the birthday of the Prophet Muhammad.

"Let us wage jihad against Switzerland, Zionism and foreign aggression," he said.

"Any Muslim in any part of the world who works with Switzerland is an apostate, is against Muhammad, God and the Koran."

In a referendum last November, 57.5% of Swiss voters approved a constitutional ban on the building of minarets. An appeal against the ban has been submitted to the European Court of Human Rights.


Hannibal Gaddafi's arrest in 2008 sparked the diplomatic spat
Libya's move came after Switzerland allegedly blacklisted 188 high-ranking Libyans, denying them entry permits. The Swiss ban is said to include Mr Gaddafi and his family.

The row began after the arrest of Mr Gaddafi's son Hannibal and his wife, Aline Skaf, in Geneva in July 2008.

They were accused of assaulting two servants while staying at a luxury hotel in the Swiss city, though the charges were later dropped.

Libya retaliated by cancelling oil supplies, withdrawing billions of dollars from Swiss banks, refusing visas to Swiss citizens and recalling some of its diplomats.

In the same month that the Gaddafis were arrested, Libyan authorities detained two Swiss businessmen, in what analysts believe was a retaliatory move.

One was finally allowed to leave the country earlier this week but the second was transferred to jail, where he faces a four-month term on immigration offences.