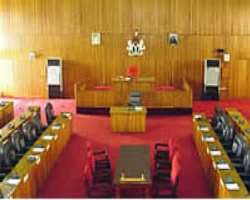 San Francisco Feb 24, (THEWILL) – The Edo State House of Assembly elected a new speaker and other principal officers of the House on Wednesday while its crisis continued.

Legislators of the House of Assembly were involved in violent confrontations on Monday leaving many legislators wounded and a few hospitalized. The disturbance was due to the introduction of a motion, which would have led to the impeachment of former speaker Zakawanu Garuba (PDP) and his leadership.

Because of the bloodbath, the Edo State Police Command sealed off the National Assembly in order to maintain law and order.

Meanwhile, an Edo State High Court sitting in Benin City has restrained Garuba and Levis Aigbogun from parading themselves as Speaker and Deputy Speaker while also restraining the State Police Commissioner from sealing off the Assembly. The ruling was made by Justice Esther A. Edigin, of Court 4 in suit filed by Hon. Peter Aliu, Speaker Pro-tempore and the House of Assembly.

Meanwhile, two other members of the House from the Peoples Democratic Party (PDP), Adesotu Christopher and Ereghan Edosele, have denied signing the document used to remove Garuba on Monday. They said in separate statements made available to journalists that the remained committed to the PDP and the authority of the House of Assembly under the leadership of Zakawanu Garuba as Speaker.

It was difficult getting access to the Assembly as initial attempts by legislators were resisted by the armed policemen stationed there. The lawmakers later met with the Commissioner of Police Kachi Udeoji and at about 2 p.m., the police opened the assembly complex's gates for sitting to commence.

The AC and PDP have been locked in a battle for supremacy in the State. Chief Anthony Anenih leads the PDP while Governor Adams Oshiomhole leads the AC.