Massive Looting In NDDC, As Board Members Get N999.5 Million Contract Each 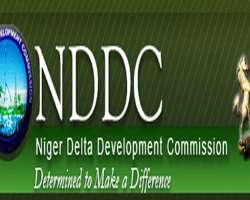 Few weeks to the expiration of their tenure, members of the Board of the Niger Delta Development Commission, NDDC, have jetted out of the country to England after allegedly looting the treasury, awarding contracts to themselves for the procurement of Fire trucks to the tune of N999.5 Million to each.

This is even as another allegation surfaced that while over N40 Billion of the Commission funds have not been accounted for, the Managing Director, Dr. Chris Oboh commenced payment for over 135 contracts he awarded to himself that are yet to be executed.

Under the law, the NDDC cannot award contracts exceeding N1 Billion without seeking the approval of the Bureau of Public Procurement, BPP.

But the Board members allegedly split the contracts, awarding it to themselves for N999.5 Million to beat the BPP. They have allegedly jetted out to London to process the payments through the offshore account of the NDDC and organize a end of tenure party, a petition sent to President Goodluck Jonathan alleges.

The petition sent to President Goodluck Jonathan alleged that about 400 projects have been awarded in advance and payments being processed to beat the expiration of the current board tenure.

'The anti-corruption campaign of the Goodluck Jonathan administration is a shameful gospel that must never be preached. The extent of impunity displayed by public officers appointed by the president has been to say the least, extreme. The crass corruption of the members of the board of the Niger Delta Development Commission is shameful, and it is the most embarrassingly soiled chevron on the president’s insignia.

'The board of the Niger Delta Development Commission has in the last six weeks commenced the full blown looting of the commission. Only last week on June 18, 2013, each board member was awarded a supply job worth N1billion as severance package and they have been paid 100 per cent upfront (not 15% as prescribed by the procurement act).

'These projects were secretly awarded and did not go through any due process. Amongst the equipment procured under the emergency procurement provision are 40 fire trucks, which will be distributed to the states on delivery. This secret payment was effected through the NDDC foreign account.

'Apart from that, about 400 additional projects have been awarded in advance by the current board from the 2013 budget (which is yet to be appropriated and released by the national assembly).


'Sadly, hundreds of projects remain stalled and unpaid for. Over 200 completed projects are lying on the Managing Director’s table unpaid. These projects were shoved aside to create room and funds to accommodate the massive looting which is on-going in the commission presently. The Managing Director has told contractors that they should take their non-payment query to the president who has bluntly refused to release monies owed the commission.


'Your Excellency, the 2013 budget is yet to be passed but as at the 3rd day of June 2013, over 200 projects have been awarded from the line items and non-line budgetary components of the 2013 budget tagged – Corporate Social Responsibility budget.

The implication of this act of sabotage is that though the 2013 budget has not been passed, the existing board has already enormously encumbered the budget with funds meant to be for the payment for on-going projects, especially the completed ones for which contractors borrowed monies from banks to execute.


'Under the current board expected to vacate office in a couple of weeks, about 2500 projects have been awarded. This surpasses the total number of projects awarded by previous boards in the last 5 years.


'Also very worrisome is the fact that the Managing Director is currently making full payments for his over 135 contracts awarded to himself fully even when the contractors are yet to move to site. This is made possible by the Managing Director’s point man and kinsman, the Director Project Monitoring and Supervision who he recently placed in that position to pave way for massive looting.


'Finally, as we write this petition to the president, all key members of the board of the Niger Delta Development Commission have embarked on a trip to the United Kingdom for a party, after which they plan to share their severance loot – an event they have called ‘final empowerment’, as payments instructions will be made to the bank and delivered by hand by the Managing Director.


'Over 40 billion naira in the commission as at present has not been accounted for; even the offshore accounts of the commission have been carelessly transferred to private accounts. We are surprised that the President is not aware of this and nothing has been done so far to check these fraudulent acts.


'Mr. President, the Region is yet to feel the impact of the NDDC under your leadership. The agency under the leadership of Dr. Chris Oboh has been a huge disappointment and colossal failure. The crass incompetence of the Chairman and members of the board has been a rude slap on the scarred face of our people, and immediate steps must be taken to address the unbelievable poverty ravishing the land.”

'While some people close to you continue to quietly abet this corruption, it is important to note the sad role of the office of the Secretary to the Government of the Federation, the Bureau of Public Procurement (BPP) and some national assembly members and aides to the President in this sordid mess. Senator Pius Anyim and Engr. Emeka Eze have showed a severe level of indifference in the overall performance of this board, and the reason is clear. They have become the biggest contractors of the commission, fronting aides for several multi-billion contracts. We have all the details.

'After almost 18 months of this impotent team, no major project – road, water or electricity projects were completed or commissioned. Contractors have abandoned almost all sites because the commission in the last eight months have only been paying for projects belonging to board members. It is shameful that only about 24 nos 1km roads and few other projects have been completed during their tenure. The performance statistics has been terrible:

Our prayers are as follows:
1. The immediate sack of Engr. Emeka Eze the grand conspirator and launderer of the evil perpetuated by the current board of the Niger Delta Development Commission.

2. The accelerated removal or dismissal of the board led Dr. Tarila Tebipah and Dr. Chris Oboh. Any extra day saved the Region is a bliss.

3. The immediate cancellation of new projects awarded by the board of the Niger Delta Development Commission from late 2012 and the CSR component of the 2013 budget which has not been passed into law.

4. An immediate order to probe all contracts awarded and payments made by the this board since their inception till date.

5. A public enquiry to probe the board on it performance.

6. The immediate payment of all contractors whose payment invoices (IPC’s) have been lying on the MD’s table for several months in careless non-adherence to the provisions of the procurement act which states that payment invoices or IPC’s must not be delayed for more than 8 weeks from the date of submission of invoice.

Mr. President our final plea is that you show more concern and get involved in the affairs of the Region. Hand pick the board of the NDDC yourself and do not rely on political associates or party affiliates. Whatever process that produced this board is complete hazard and must not be repeated.