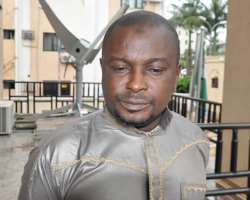 SAN FRANCISCO, June 24, (THEWILL) – The Economic and Financial Crimes Commission, Monday, arraigned one Abubakar Sadiq Musa before Justice Adebunkola Banjoko of the High Court of the Federal Capital Territory sitting in Gudu, Abuja on a 5-count charge bordering on criminal breach of trust, forgery and falsely obtaining over nine million from intending pilgrims.

The arraignment followed the re-arrest of the accused who had jumped an administrative bailed earlier granted him by the EFCC.

The accused and his accomplices, Mr Tijani Iliyasu and Hajiya Hadiza, allegedly used forged documents to dishonestly collect the sum of N9, 883,000.00 from one Murtala Abdullahi and his partners in order to secure visas for intending pilgrims to the 2012 Hajj.

One of the counts in the charge read; "That you Abubakar Sadiq Musa, on or about 9th October, 2012 in Abuja in the Abuja Judicial Division of the High Court of the Federal Capital Territory with intent to defraud did obtain the sum of N4,500.000 ( Four Million Five Hundred Thousand Naira Only) from one Hadiza Tanko Mohammed of Okomoko Street, D/Line Port Harcourt, Rivers State, being part payment of a total sum of N11,500,00.00 ( Eleven Million Five Hundred Thousand Naira Only) which you claimed to use for procuring visas and other travelling documents for 23 intending pilgrims for Hajj Pilgrimage, a fact which you knew to be false and thereby committed an offence contrary to section 1(1)(a) and punishable under section 1 (3) of the Advance Fee Fraud and Other Related Offences Act 2006”.

The accused pleaded not guilty to the charge when it was read to him, prompting his counsel, Alozie Merengwa to seek leave to file an oral application for bail claiming that he was recently briefed and didn’t have enough time to make a written application.

The prosecution counsel, Gift Odibo however objected. She told the court that the accused had jumped an administrative bail earlier granted him, and that he could not be arraigned at the last adjourned date until he was re-arrested in Kano.

Justice Banjoko thereafter ordered that the accused be remanded in Prison custody while fixing June 28, 2013 for ruling on the bail application.