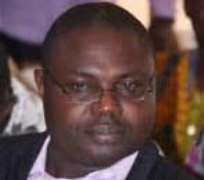 
The crisis in the Nigeria Governors' Forum (NGF) has worsened with two governors at daggers-drawn over who is legitimate chairman of the forum now factionalised. Its relevance to the development of the country's democratic dispensation is scrutinised in this interview granted to Saturday Vanguard by an accomplished scholar, Dr. Sylvester Odion Akhaine, Department of Political Science, Lagos State University, LASU.

Excerpts:
Don't you think it's time to resolve the chairmanship dispute in NGF and bring about reconciliation among the feuding governors?

The question is not about reconciliation. In the first place, the Nigeria Governors' Form (NGF) is an aberration in the democratic system. Agreed that the Nigerian constitution allows people to form associations and thereby to associate at different levels - whether at national, state and local government levels. However, the Governors' Forum is an aberration. It is counter productive to the Nigerian people and the polity. It does not have the interest of Nigeria.

Odion Akhaine
One may ask: How does it promote the interest of the Nigerian political system? What can we point out to have been achieved by the forum since its inception and for the development of democracy? It is just an executive umbrella for sharing tips of misgovernance.

Can you be specific about the failings of the governors?

What we have in the states are overwhelming social crimes. From Edo to Abia, there are kidnappings all the way. From Borno to Yobe and major parts of the north, it is Boko Haram.

If the governors cannot use their mandate to solve these problems, then how relevant are they in tackling the socio-economic challenges confronting the nation! It is unfortunate, they are just in the NGF to share the spoils of office and looting of the common wealth belonging to the people.

Secondly, the NGF is being drawn into the presidential election of 2015. So the crisis is about coalescing, about interest, that the incumbent President Goodluck Jonathan either emerges as leader of Nigeria or not.

How can you justify such assertion?
About 10 years now, precisely since 2003, the governors have become powerful, hijacked the presidential structure, calling the shots and deciding who becomes the next president.

Former President Olusegun Obasanjo picked the Governor of Katsina State, Alhaji Umaru Yar'Adua (now late) to become President of Nigeria in 2007. Now we are in for the 2015 presidential race and the governors are jostling.

It's all about contestation for state power. Hence I said that the governors are being drawn into 2015, and that the NGF is counter productive to the development of the nation. Nothing good is coming out from this club of governors, except that they are justling for political power. Have they stopped looting? They are just in contest for power.

But one of the objectives of the NGF is fostering of the peer review mechanism. Do you think the governors are doing this?

Unfortunately, they have disappointed the people, betrayed the people's trust. All their plans are mainly about politics - justling for 2015. The 2015 politics is contestation of political actors for control of public affairs. That contest could be pacific (peaceful) or cataclysmic. But we expect the electoral contest done within the basic law of the Nigerian state.

Are you optimistic there won't be problems n the 2015 presidential vote?

I cannot say anything about the 2015 election. However, time will tell.

In this interactive session with Dr. Sylvester Odion Akhaine, a Political Scientist, he avoided reference to either Governor Rotimi Amaechi of Rivers State who was declared winner of the NGF chairmanship election or Jonah Jang, Governor of Plateau State, who also laid claim to being elected as NGF chairman, thereby splitting the governors into two factions.

He did not want to be drawn to either supporting or having sympathy for Amaechi or Jang factional leadership.

'You can go out and conduct opinion poll or Vox populi on who out of the two factional chairmen has more support,' he advised.