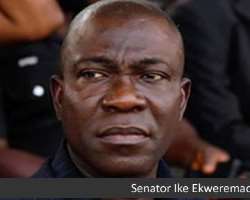 Chairman of the Senate Committee on the Review of the 1999 Constitution, Senator Ike Ekweremadu has said that the quest for state creation by various groups and interests across the country was not tied to the ongoing constitution amendment exercise.

Ekweremadu who also is the Deputy President of the Senate made the clarification during a visit by the Enugu State Government's Committee on the Actualisation of Adada State to his Office in Abuja today.

On why the request for the creation of Adada State was not recommended by the Senate Committee, the Deputy President of the Senate explained that the documents before the Committee showed that the request did not meet the provisions of Section 8 of the 1999 Constitution.

Senator Ekweremadu said: 'To be sure that we are fair to all, especially matters that had to the issue of state creation, I was insistent that the whole 61 requests should be analysed individually, and we referred the entire work to our panel of consultants which is made up of the best in the areas of Constitutional Law and Federalism in this country.

Senator Ekweremadu insisted that no part of the country could be shortchanged in the constitution amendment process since 'luckily enough, all the States are represented on that Committee to ensure that there is no conspiracy against a particular part of the country or zone.'

He however allayed the fears of those agitating for state creation who thought that the failure of the senate Committee on the Review of the 1999 Constitution to recommend their request was the end of their aspirations.

Senator Ekweremadu said: 'We use the opportunity to state clearly, not just to the people of Adada, but also the entire other groups, that the opportunity for State creation is a continuum, not limited to when there is a constitution amendment and we are not giving up on State creation, but what we insist on is for the correct thing to be done.

'Section 8 of the 1999 Constitution that deals with the issue of State creation does not make any timeframe within which it should be done; the only limitation there is that if you are asking for a state, because the signatories are elected officials, it must be within the period that they are in office, otherwise, you cannot say that you have signatures of Members of the House of Representatives when they are no longer in the House of Representatives.'

He therefore urged agitators for new States not to be disillusioned as 'any request that does not meet the requirements of Section 8 can still be amendment and then upgraded in accordance with Section 8 and sent to the House of Representatives and the Senate.'

'Once we verify the signatures and we are satisfied that those signatories are genuine, and consent sort and obtained, we will take the next step of directing the Independent National Electoral Commission to take the next step to conduct a referendum' he added.

'For me as the Chairman, I need to ensure that I am fair to all concerned; yes, I am from Enugu State, but I represent the entire Senate and people of Nigeria on that Committee', he emphasised.

Earlier in his address, the leader of the delegation and Chairman of the Enugu State Government's Committee on the Actualisation of Adada State, Major General Godwin Ugwoke (retd), said that members of his Committee came to seek clarification on why their request was not recommended by the Senate Committee even when they thought they had met all the constitutional requirements.

The Chairman urged the Senate to reconsider and give its support to the request for the creation of Adada State.